Available in September, the Collectible Tins allow Duelists to make their Decks much more powerful, with a collection of booster packs designed to increase the complexity and power during matches. These tins offer an assortment of the game’s top-selling booster packs, which include Pharoanic Guardian, Magician’s Force, Dark Crisis, Invasion of Chaos, and Ancient Sanctuary. In addition, each of the six unique tins will include one of six brand new cards. 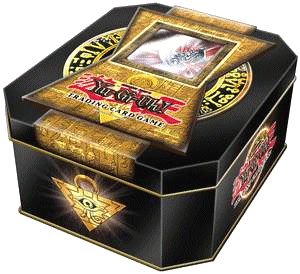 In December, UDE is also pleased to release the new, and first-ever Yu-Gi-Oh! TCG Master Collection. This highly collectible set will include the first six Yu-Gi-Oh! TCG boosters ever released in a stylish, gold, Egyptian-themed storage portfolio. Each folder will include a Legend of Blue Eyes, Metal Raiders, Spell Ruler, Pharaoh’s Servant, Labyrinth of Nightmare, and Legacy of Darkness booster packs, and six variant cards, including the highly sought after “Exodia the Forbidden One” card.

During the game, players Duel each other by summoning monsters and activating Spell and Trap cards. Using a Starter Deck and/or booster sets, Duelists collect cards to play their hands against other Duelists. Duelists with well-constructed Decks, powerful monsters, solid strategy and a little good fortune are the winners in the Yu-Gi-Oh! TRADING CARD GAME.

For more information on tournaments, the latest in Yu-Gi-Oh! TRADING CARD GAME news and product introductions, visit www.yugioh-card.com, or www.upperdeck.com.

About Yu-Gi-Oh! The object of the Yu-Gi-Oh! TRADING CARD GAME is to win a Match (which consists of three duels) by reducing an opponent’s “life points” from 8,000 to zero. This is accomplished through a series of turns using a deck with a minimum of 40 cards and a combination of strategy, skill and luck. Three main types of cards are used in Yu-Gi-Oh! TCG: Monster Cards, Spell Cards and Trap Cards, with each category being further divided into sub-categories. For more information on the Yu-Gi-Oh! TRADING CARD GAME or Upper Deck Entertainment, please visit www.yugioh-card.com or www.ude.com.

The Yu-Gi-Oh! franchise is based on the Yu-Gi-Oh! comic series from artist Kazuki Takahashi that first appeared in Japan in 1996. It is currently being serialized in SHONEN JUMP, the monthly manga magazine published by VIZ, LLC. The comic spawned a hit cartoon TV show, a top-selling collectible card game, several video games and other licensed merchandise. Yu-Gi-Oh! follows the adventures of Yugi, a young boy who possesses the “Millennium Puzzle” that allows him to transform into the “Game King” whenever he is challenged.