WHO WILL EMERGE AS BATTLE CITY CHAMPION?

The DVD features five episodes including:

The Final Face-Off (Parts III, IV & V) – Yugi is trapped in the most treacherous Shadow Game he’s ever played – and his time is almost up! Yugi’s two Egyptian god cards “SLIFER and OBELISK” have been destroyed by Marik’s WINGED DRAGON OF RA! If Yugi doesn’t turn things around soon, Marik will gain the power necessary to destroy the world!

One for the Road – KaibaCorp Island is set to explode in mere minutes and the gang is stranded! To make matters worse, Kaiba and Mokuba are nowhere to be found! Can Yugi and his friends escape in time, or will they sink to the bottom of the sea!?

Looking Back and Moving Ahead – As Tea and Serenity tour around the Town of Domino and reminisce about their friends’ battles during Battle City, they learn how much they’ve grown and how far they’ve come – and how far they have left to go! 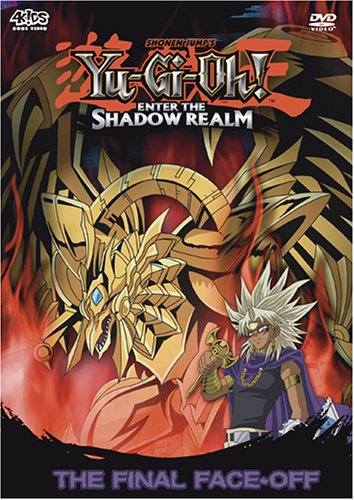