Fans get a double dose of the Blue Eyes White Dragon!

February 3, 2006 – An announcement was made today by Konami of Europe, stating that the Yu-Gi-Oh license will be seeing a double pack release for Game Boy Advance. The double pack includes Yu-Gi-Oh! The Sacred Cards, and Yu-Gi-Oh! Reshef of Destruction. Though the double pack is a classic “double dip” for the GBA, it does include three limited official trading cards, making it a must-buy for collectors and card-battlers alike. 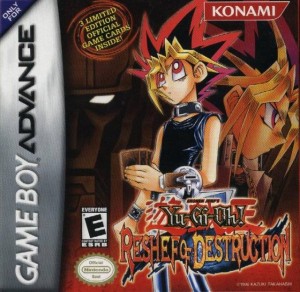 Konami states that the double pack comes due to a tremendous following that has been generated on the GBA. The games are a mix of RPG and card-battle elements, following the characters from the TV series as they attempt to climb the ranks of a dueling competition hosted by the Kaiba Corporation. Reshef of Destruction follows Yugi on his quest to defeat a powerful Dark Being, who plans to take over the world. In order to do so, Yugi must defeat over 100 duelists to complete an unbeatable deck of cards.

Christopher Heck, Konami’s European brand manager, had the following to say about the Yu-Gi-Oh! Franchise, and its success on the GBA platform:

“The Yu-Gi-Oh! franchise is one of Konami’s most successful and popular, and this great value Yu-Gi-Oh! Double Pack is the ideal way for duelists to start the year. It will be followed by a number of key new and innovative Yu-Gi-Oh! titles in the New Year, marking yet another strong year for the series.”

Further Konami Double Pack products will be launched in 2006 and announced shortly.