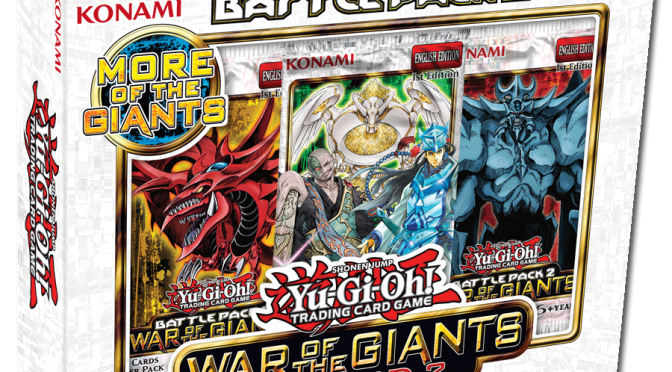 REINFORCEMENTS ARRIVE WITH THE Yu-Gi-Oh! TRADING CARD GAME WAR OF THE GIANTS: ROUND 2

El Segundo, CA  – January 20, 2014 – Kicking-off the New Year with a bang, Konami Digital Entertainment, Inc. (Konami) delivers with an explosive first release of 2014 with War of the Giants: Round 2 – available now.

The (non-draftable) collector’s cards are in high demand so Duelists have been begging to have these compelling, tournament-level cards re-released. Because this collector’s card is not involved in the draft process, Duelist’s can add it right into their collection. War of the Giants: Round 2 is a fantastic value as each box contains six packs of Battle Pack 2, plus a new 16-card pack containing one of five Ultra Rare collector’s card such as the royal Fog King, High Priestess of Prophecy and Dragunity Knight Vajrayana or the monstrous Safe Zone and Number 11: Big Eye, six Super Rare cards and nine Common cards all for only MSRP: $19.99.

For more information on Konami or the Yu-Gi-Oh! TRADING CARD GAME, please visit http://www.yugioh-card.com or call 310-220-8630 to speak directly with a Yu-Gi-Oh! customer support team member.

Two players engage in a Duel while using cards that represent powerful monsters, magical Spells and surprising Traps. Duelists with well-constructed Decks, dominating monsters, solid strategy and good fortune are the victors in the Yu-Gi-Oh! TCG.  Konami Digital Entertainment, Inc. is the exclusive licensee and rights holder to the Yu-Gi-Oh! TCG in North America and Latin America.

KONAMI is also the manufacturer of the wildly popular Yu-Gi-Oh! TRADING CARD GAME, which has sold more than 25 billion cards worldwide.  The latest information about KONAMI can be found on the Web at www.konami.com.

KONAMI CORPORATION is traded in the United States on the New York Stock Exchange under the ticker symbol KNM.  Details of the products published by KONAMI can be found at http://www.konami.com