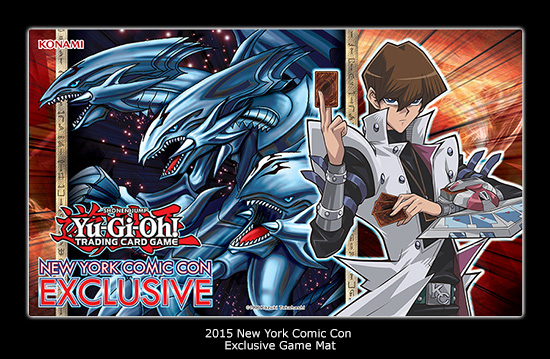 Every fall, pop culture enthusiasts from all over the world head to NYCC to see what is new and trending and KONAMI is in the center of it all! Attendees will want to reserve a spot in line to create their own exclusive one-of-a-kind Yu-Gi-Oh! Token Card at the Yu-Gi-Oh! green screen photo booth. They can choose from six different card backgrounds, including favorites like Yugi, Jaden, Yusei, and Yuma, plus new designs that include Yuya and the 2015 NYCC logo – all suitable for use during Duels.

Attendees new to the Yu-Gi-Oh! TCG can head to a game table to get a demonstration from the experts. Those completing a demo will receive a demo deck and show-exclusive coupon good for $3 off the purchase of either Super Starter: Space-Time Showdown or Space-Time Showdown Power Box, or $5 off the purchase of Super Starter: V for Victory (redeemable only at KONAMI’s booth during NYCC).

At the booth’s retail counter, fans will want to buy an NYCC exclusive Yu-Gi-Oh! TCG game mat before it sells out! Available for just $30, this collectible game mat features Kaiba and his fearsome Blue-Eyes Ultimate Dragon. For those wanting to add to their existing card portfolio they can also purchase new and popular Yu-Gi-Oh! TCG products every day of the show while supplies last, including new releases like High-Speed Riders, 2015 Mega-Tins, and Synchron Extreme Structure Deck, in addition to popular sets like Duelist Pack: Battle City and Clash of Rebellions. Products are only available while supplies last, so be sure to stop by early!

Attendees looking for a chance to show off their Dueling skills will have plenty of opportunity to do so right at the KONAMI booth, with a variety of free Tournaments held through all four days of the show. Players feeling at the top of their game can throw down the ultimate challenge and Duel the Master as he sits on his royal throne, for a chance to take home some other prizes!

A New York Comic Con badge will be required to attend. For more information about the event: http://www.newyorkcomiccon.com/

About The Yu-Gi-Oh! TCG
The Yu-Gi-Oh! TRADING CARD GAME is the #1 trading card game in the world with over 25 billion cards sold. It is a game of strategy, where players create individual Decks of cards collected from Structure Decks and Booster Packs. Two players engage in a Duel while using cards that represent powerful monsters, magical Spells and surprising Traps.

Duelists with well-constructed Decks, dominating monsters, solid strategy and good fortune are the victors in the Yu-Gi-Oh! TCG. Konami Digital Entertainment, Inc. is the exclusive licensee and rights holder to the Yu-Gi-Oh! TCG in North America and Latin America.