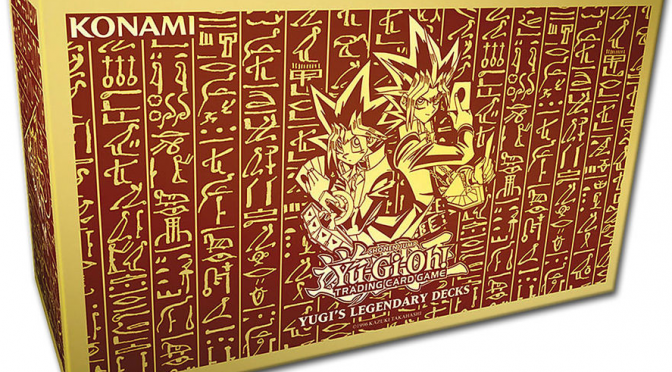 El Segundo, Calif. (November 9, 2015) – Just in time for the holiday gift-giving season, Konami Digital Entertainment, Inc. (KONAMI) delivers a must-have product for fans on November 13 with Yugi’s Legendary Decks. This latest Yu-Gi-Oh! TRADING CARD GAME (TCG) release is a magnificent collector’s set which contains three different Decks used by the “King of Games” himself, plus several unique, collectible foil cards, all in one gold foil-stamped box. With Yugi’s Legendary Decks, Yu-Gi-Oh! fans can re-live the memorable Duelist Kingdom and Battle City storylines with the Decks that Yugi used to defeat his rivals, rescue his Grandpa from Pegasus, protect the Pharaoh’s legacy, and save the entire world from the maniacal menace of Marik! 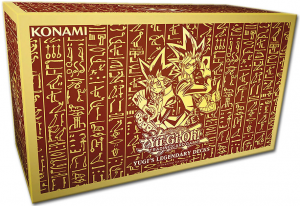 This remarkable box set is overflowing with dozens upon dozens of fan-favorite and collectible cards, easily pleasing both the veteran or budding Duelist. Filled with iconic cards such as Black Luster Solider, all five pieces of Exodia, the Forbidden One all in the Ultra Rare rarity, Valkyrion the Magna Warrior, and the special, long-awaited Arkana-style Dark Magician, each box set includes three different 41-card Decks. The first Deck is one used by Yugi in the debut season of the original Yu-Gi-Oh! animated series, including his initial Duel with Seto Kaiba and his adventures in Duelist Kingdom. The second Deck is inspired by Yugi’s Duels in the Battle City story arc from the second and third seasons of the original Yu-Gi-Oh! animated series. Not to be outdone, the third 41-card Deck was used by Yugi as he battled The Pharaoh in the final Duel of the original series, focused on “Gadget” monsters and the “Silent” series of “LV” monsters. 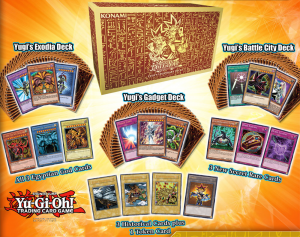 Yugi’s Legendary Decks will be available nationwide for $29.99 MSRP.

For more information on KONAMI or the Yu-Gi-Oh! TRADING CARD GAME, please visit www.Yu-Gi-Oh!-card.com or call 310-220-8630 to speak directly with a Yu-Gi-Oh! customer support team member.

About KONAMI
KONAMI is a leading developer, publisher and manufacturer of electronic entertainment properties and traditional trading card games. KONAMI‘s software titles include the popular franchises Metal Gear Solid, Silent Hill, DanceDanceRevolution and Castlevania, among other top sellers. KONAMI is also the manufacturer of the wildly popular Yu-Gi-Oh! TRADING CARD GAME, which has sold more than 25 billion cards worldwide.