Yu-Gi-Oh! Championship Series (YCS) Sao Paulo marks the last YCS of 2015 in the Americas.  Competitions will resume in 2016.

El Segundo, Calif. (November 18, 2015) – Gather your passport, lock in your itinerary, and pack your belongings because the Yu-Gi-Oh! Championship Series (YCS) is scheduled to visit Sao Paulo, Brazil! Konami Digital Entertainment, Inc. (KONAMI), the manufacturer of the globally popular Yu-Gi-Oh! TRADING CARD GAME (TCG), will once again welcome Duelists when they arrive for this competitive weekend-long event to determine early season bragging rights on November 28-29. YCS Sao Paulo will provide one last big-time event for Duelists in 2015, before the calendar flips to 2016, to prove worthy of being a Yu-Gi-Oh! Champion.

The Yu-Gi-Oh! TCG is a card game involving strategy and skill made famous by the Yu-Gi-Oh! manga and animated TV series. At YCS Sao Paulo, Duelists young and old, novice and veterans alike, will compete for a bounty of exciting prizes. The first place winner will receive an Ultra Rare version of the latest most sought-after prize card: Minerva, the Exalted Lightsworn – one of the rarest Yu-Gi-Oh! TCG cards in existence! 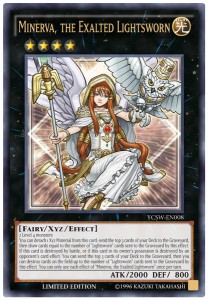 Hoping to end the season with a win, Duelists will enter the Anhembi Convention Center on Saturday morning believing they have the precise combination of luck and strategy for a shot at glory and prizes. Duelists will put their practice and Deck-building skills up against some of the best players the game has to offer for the chance to advance to the Final Round on Sunday and the opportunity to Duel for the title of YCS Champion.

With the newest products, the High-Speed Riders and Dimension of Chaos booster sets adding suspense to the Duels, Yu-Gi-Oh! Championship Series Sao Paulo will be an excellent environment for live game-testing as Duelists unveil brand new strategies and Decks. Duelists will need to devote extra attention to see how the inclusion of the new cards from these products impacts the YCS standings!

Pre-registration for YCS Sao Paulo will run from 3:00 p.m. – 7:00 p.m. on Friday, November 27 and registration will continue promptly at 8:00 a.m. on Saturday, November 28.  Upon registering, Duelists will receive four Dimension of Chaos booster packs for participating in KONAMI’s YCS Sao Paulo.  Round One will start at 10:00 a.m. and the top ranked YCS finishers will earn invitations to participate in the 2016 World Championship Qualifier. Players will use their constructed Decks all of the way to the Championship.

Accompanying the Main Event, KONAMI will be conducting Dragon Duels (for Duelists born in 2003 or later). The Dragon Duel tournaments on both Saturday and Sunday will be sealed, using Battle Pack 3: Monster League where each Duelist is given 9 sealed Battle Packs to make a new Deck.  The top four finishers in the Dragon Duel events will receive winners’ medals, a Regional Deck Box, and a 2016 Regional Game Mat. Top-ranked finishers (based on attendance) will also win an invitation to their 2016 Dragon Duel World Championship Qualifier. The two victors from the Saturday and Sunday tournaments will face off in a best 2-out-of-3 match using their own pre-constructed Decks in the Advanced Constructed format, to determine the weekend’s overall winner and a chance at the ultimate prize: to hoist the Dragon Duel Champion’s trophy and the coveted title of YCS Dragon Duel Champion! The Dragon Duel Champion will also receive a previously issued Super Rare YCS prize card. Entry to the Dragon Duel tournaments is free to qualified players.

One thought on “Details of the Upcoming Yu-Gi-Oh! Championship Series in Sao Paulo Released”