El Segundo, Calif.  (November 30, 2015) – Sao Paulo, Brazil, known for being the 12th largest city in the world, hosted large numbers of Duelists from across the Americas as they competed in the Yu-Gi-Oh! CHAMPIONSHIP SERIES (YCS) this past weekend.

Duelists of every age and playing ability participated in the premier-level Yu-Gi-Oh! TRADING CARD GAME (TCG) event, presented by Konami Digital Entertainment, Inc. (KONAMI), and showed off their impressive Dueling skills for the chance to be seen holding the YCS Champion’s hardware.

Victory was in the cards for Alejandro Reyes, from Mexico, D.F., who outpaced the field to claim the coveted title and bragging rights of YCS Champion and Pablo Reich, from Sao Paulo, Brazil, who took home the Dragon Duel Champion’s title. YCS events are amazing platforms for Duelists wanting to assess the latest big-match strategies and card combinations against their opponents.  Throughout the weekend, many in the field of players showed refined skills and a splash of luck, but it was the elite players that emerged to win top honors. 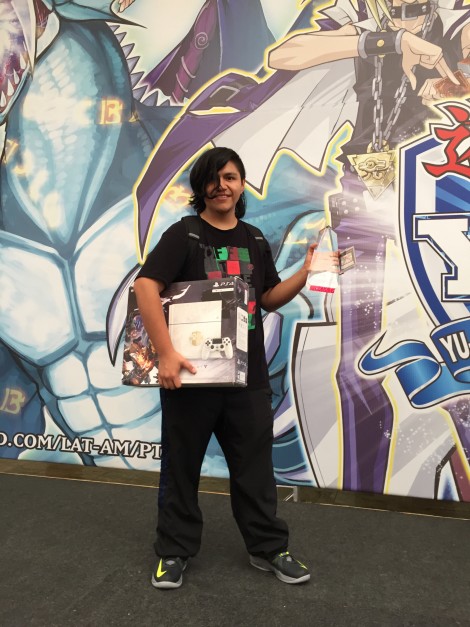 Reyes triumphantly battled his way into Sunday’s Single Elimination with his own first-rate Kozmo Deck. Then, after several rounds of Single Elimination, it came down to an exciting playoff with Mateus Nobile Silva, from Brasilia, Brazil, and his Kozmo Deck.  Reyes’ combination of precise play and smart risk-taking helped earn him the title of YCS Sao Paulo Champion.

In addition to the title of YCS Champion, Reyes returned home with a stellar set of prizes that included a YCS Championship Trophy, an Ultra Rare YCS Minerva, the Exalted Lightsworn Prize Card, a PlayStation®4 computer entertainment system, and an invitation and paid travel to his/her 2016 World Championship Qualifier (WCQ) tournament!

In the Dragon Duel Championship, an event for Duelists born in 2003 or later, Reich used his Sealed Deck then switched to his own Kozmo Deck in the final matchup to beat Pedro Silbeiro, from Sao Paulo, Brazil, in a head-to-head playoff.  Reyes picked up some great prizes too, including a 2016 Regional Game Mat, a Dragon Duel Medal, a Regional Deck Box, a Dragon Duel Championship trophy, a Super Rare set of the YCS Darklord Prize Cards, and an invitation to the 2016 Dragon Duel World Championship Qualifier tournament to be held during his/her WCQ.

One thought on “Official winners from this past weekend’s Yu-Gi-Oh! Championship Series in Sao Paulo”