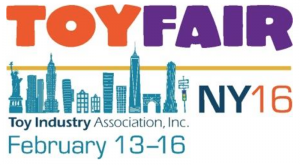 EL SEGUNDO, Calif., Feb. 10, 2016 /PRNewswire/ — Konami Digital Entertainment, Inc. (KONAMI) is poised for an exciting and successful 2016 with its deep portfolio of Yu-Gi-Oh! TRADING CARD GAME (TCG) products. KONAMI is set to unveil their 2016 first and second quarter products at the American International Toy Fair February 13-16 in booth #4925 at the Javits Center in New York City.

“We are quite excited by the successes of 2015 as our Yu-Gi-Oh! TRADING CARD GAME products, combined with our growing fan base, have set the stage for a great year ahead,” said Yumi Hoashi, Senior Vice President, Card Business for Konami Digital Entertainment, Inc.  “Toy Fair gives us the chance to share our product release schedule and promotional plans with our hobby and mass market partners in a fun environment. After having one-on-one meetings at the show, they walk away confident knowing we can satisfy the needs of both new players and competitive Duelists,”

Duelists who have amassed a collection of new cards during the past few months can now show off their stash in style with Yu-Gi-Oh! Chibi Sleeves also releasing February 12. These glossy, premium quality tournament-legal sleeves feature the iconic Yugi – in all his super-deformed glory!  Naturally, the Chibi Sleeves go great with the Yu-Gi-Oh! Duelist Kingdom Chibi Game Mats and the  Yu-Gi-Oh! Chibi Card Case, both released last year – collect all of them to complete an awesome Chibi set.  MSRP: $3.99 per 50 card sleeve pack. Duelists can add a little dazzle to their collections on March 18 with Premium Gold: Infinite Gold. This set has something for everyone, including dozens of upgraded cards to bling out a player’s collection plus 21 new cards for a Duelist’s Main Deck and Extra Deck, all gleaming in gold foil technology. On April 15, the original Yu-Gi-Oh! TV series takes center stage with Millennium Pack as dozens of old favorites get a whole new look alongside brand new cards from TV that for years players have been clamoring. This 48-card set includes more than 20 variant artwork illustrations for classic cards like Thousand Dragon, Flame Swordsman, Widespread Ruin, Kunai with Chain, and Celtic Guardian. Millennium Pack also offers famous cards from the TV series that have never been in print before, including Kaiba’s ultimate card-drawer, the Card of Demise, and the final version of the mightiest Egyptian God Card: The Winged Dragon of Ra – Immortal Phoenix! MSRP: $1.99 per 5-card pack. 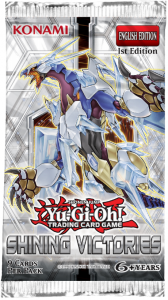 In May, the spotlight is on the May 6 release of Shining Victories, the latest Yu-Gi-Oh! TCG core booster set. Appealing to veteran and novice players alike, Shining Victories is a 100-card set with brand-new Deck themes such as Lunalight, Digital Bug, and Amorphage Dragons, support for recent and classic themes, and signals the bold return of a legendary dragon to the Yu-Gi-Oh! TCG – Blue-Eyes White Dragon – with a plethora of specially crafted “Blue-Eyes” monsters and support cards! MSRP: $3.99 per pack.

May 26 sees the release of the latest Starter Deck for the Yu-Gi-Oh! TCG*.  Designed to teach new Duelists how to Duel, the new Starter Deck is the best place to start a budding Duelist’s career! Fans will be entertained with a 40-card ready-to-play Deck, including 9 brand-new Performapal cards, and three special Token cards. MSRP: $9.99 per Deck.

Between conventions, regional tournaments and in-store events, Duelists will have plenty of opportunity to put their skills to the test this summer. For more information on KONAMI’s extensive Organized Play programs, including opportunities for aspiring Duelists to learn how-to-play the game, go to www.yugioh-card.com/en/events.

Duelists can watch all-new Yu-Gi-Oh! ZEXAL episodes every Tuesday as well as all of classic Yu-Gi-Oh!, Yu-Gi-Oh! GX, and Yu-Gi-Oh! 5D’s on www.yugioh.com in the United States. In Canada, Duelists can watch episodes of Yu-Gi-Oh! ARC-V every Friday and Saturday on Teletoon! For more information on KONAMI or the Yu-Gi-Oh! TRADING CARD GAME, please visit www.yugioh-card.com or call 310-220-8630 to speak directly with a Yu-Gi-Oh! customer support team member.