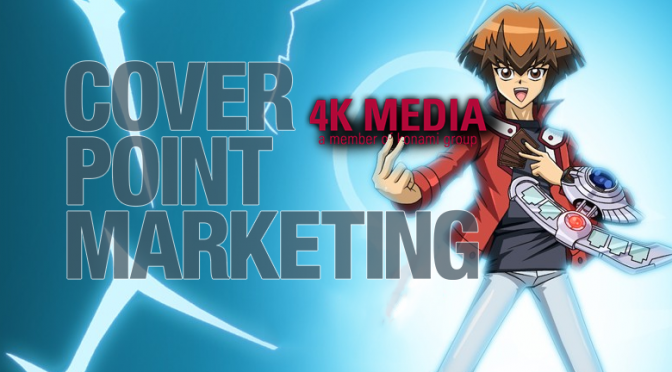 NEW YORK – March 17, 2016 – Citing the continued growth and popularity of both the Yu-Gi-Oh! on-air series and trading card game throughout Australia and New Zealand, 4K Media Inc., the Konami Digital Entertainment, Inc. subsidiary that manages the licensing and marketing of the Yu-Gi-Oh! brand, today announced it has signed a brand representation agreement for Yu-Gi-Oh! with Australia’s Coverpoint Marketing.

“Justin and his team at Coverpoint Marketing have a demonstrated ability for licensing success within the age demographic of a typical Yu-Gi-Oh! fan and we’re eager to collaborate with them to continue to grow the brand in this territory,” said Coleman. “The company will be a formidable asset in maximizing local, regional and national consumer product licensing, promotional and marketing opportunities.”

“The success of the various Yu-Gi-Oh! series on broadcast television and in trading card games sales here in Australia and in New Zealand is incredible,” added Dery. “Utilizing our enormous network of licensing, retail and promotional partners, Coverpoint is ideally situated to support 4K Media in identifying and managing the brand’s consumer product licensing prospects as well as flushing out promotional and marketing support as Yu-Gi-Oh!‘s popularity continues to grow here.”

Coverpoint’s team kicks off its representation of the Yu-Gi-Oh! brand immediately, with its first official industry event being the 2016 Toy Hobby & Licensing Fair, sponsored by the Australian Toy Association, which opens March 19, 2016, at the Melbourne Convention and Exhibition Centre.

About Coverpoint Marketing
Coverpoint Marketing provides a dedicated focus in managing and developing successful, innovative, and profitable licensing programs for its clients. Designing and executing plans that ensure all licensing activity is strategically aligned with the brand, Coverpoint prides itself on being able to deliver on client objectives. As an integral part of its clients’ marketing organization, the company adds value that often extends beyond licensing and enhances core business. Specializing in monetizing a brand property with limited risk, Coverpoint does this by extending a brand’s reach and connecting it with opportunities that generate revenue streams and build brand loyalty with customers. For more information, visit http://coverpoint.com.au/