Yu-Gi-Oh!: The Dark Side of Dimensions, the anime film that celebrates the 20th anniversary of Kazuki Takahashi‘s Yu-Gi-Oh! manga, opened on Saturday on 137 screens in Japan and ranked #6. 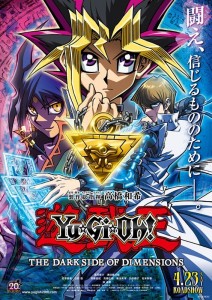 The June issue of Shueisha‘s V Jump magazine revealed a story teaser for the  anime film Yu-Gi-Oh!: The Dark Side of Dimensions on Thursday April 21st. The magazine quotes this:

For the sake of his motives, Aigami spies on Yugi and his friends as they live their everyday lives. However, after coming in contact with Kaiba, and because their goals conflict, they begin a duel. To combat Kaiba, a skilled and powerful duelist, Aigami employs frightening tactics…!

The magazine also featured the quotes, “Kaiba and Aigami, who seek to obtain the Millennium Puzzle, finally duel!,” “The duel field turns into dimensional terrain through Aigami’s power!,” and “Kaiba’s monsters become powerless…!”

Stay tuned for more Yu-Gi-Oh!: The Dark Side of Dimensions updates as we get them.

3 thoughts on “Yu-Gi-Oh! The Dark Side of Dimensions opening weekend earns 6th ranking”