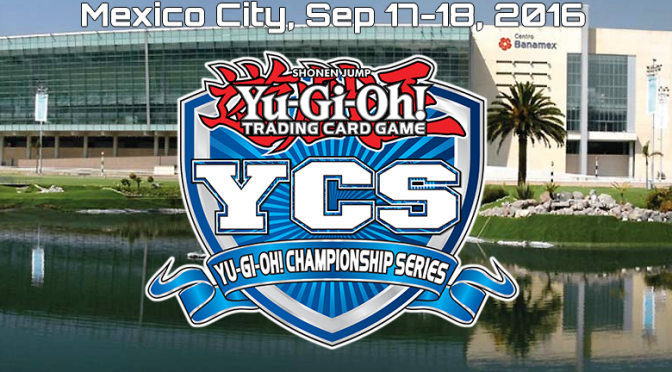 El Segundo, Calif. (September 5, 2016) – The new season is upon us, meaning once again – it’s time to Duel! Konami Digital Entertainment, Inc. (KONAMI) launches the new Central American Dueling season for its premier level Yu-Gi-Oh! CHAMPIONSHIP SERIES (YCS) in the capital of Mexico – Mexico City on September 17-18. This ultra-competitive weekend-long tournament gives hundreds of Yu-Gi-Oh! TRADING CARD GAME (TCG) Duelists throughout Mexico and Central America their first chance of the season to show off their Deck-building skills and strategies, and to compete with their peers.  The Yu-Gi-Oh! TCG is a card game involving strategy and skill made famous by the Yu-Gi-Oh! manga and animated  TV series.

Unveiling for the first time in Latin America at YCS Mexico City, Duelists will be competing for a brand-new exclusive YCS prize card for the weekend’s top finishers – Number 93: Utopia Kaiser. Different from the regular cards found in booster packs and other Yu-Gi-Oh! TCG products, Number 93: Utopia Kaiser can only be obtained by finishing in the top three spots at a Main Event of a YCS, or by winning a special Public Events playoff tournament. This makes Number 93: Utopia Kaiser highly coveted by the throngs of Duelists around the world that will participate in the high-level competitive YCS events during the course of the season.

Additionally, the top-ranked Duelists will win a brand-new YCS Top Cut Game Mat for this event featuring artwork of the new prize card.

Pre-registration for YCS Mexico City will run from 3 p.m. – 7 p.m. on Friday, September 16th and registration will continue promptly at 8 a.m. on Saturday, September 17th.  Round One will start at 10 a.m. Upon registering, Duelists will receive five of the recently released The Dark Illusion booster packs for participating in KONAMI’s YCS Mexico City. Players will use their constructed Decks all the way to the final match. The top-ranked YCS finishers will earn invitations to participate in their 2017 World Championship Qualifier. Duelists can find the answers to many of their questions here: http://www.yugioh-card.com/en/events/2016/YCS_MexicoCity.html.

Accompanying the Main Event, KONAMI will also be conducting Dragon Duels (for Duelists born in 2004 or later). The Dragon Duel tournaments on both Saturday and Sunday will feature constructed Deck Dueling.  The top four finishers in the Dragon Duel events will receive a Dragon Duel Medal, a Regional Deck Box, and a 2017 Regional Game Mat. Top-ranked finishers will also earn an invitation to their 2017 Dragon Duel World Championship Qualifier.

Additionally, a full range of Public Events such as 2017 Regional Qualifiers, Ultimate Duelist Series Qualifiers, 3 vs. 3 Team Dueling, ATTACK OF THE GIANT CARD!!, Win-A-Mat, Sealed Starter Deck and Structure Deck, Duelist League, and Yu-Gi-Oh! Day will be held through the weekend for attendees. Another brand-new event, the Generation Duel Tournament, in which players can play a Deck based off of one of the five Yu-Gi-Oh! animated series, will be held on Saturday.

For those unable to attend YCS Mexico City, Duelists can follow round-by-round online coverage of the event at www.yugioh-card.com/en/events.