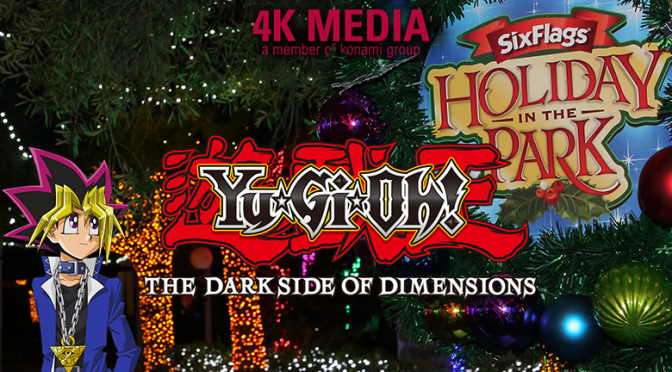 Yu-Gi-Oh! THE DARK SIDE OF DIMENSIONS MOVIE PROMOTION TO ENTERTAIN VISITORS AT SIX FLAGS THEME PARKS THIS HOLIDAY SEASON

Six Flags is excited to host this unique promotion for the Yu-Gi-Oh! brand.

During Holiday in the Park®, Six Flags’ annual holiday extravaganza which opened November 19 and operates on select days through January 1, visitors to the parks in New Jersey (Six Flags Great Adventure), the Washington, D.C. area (Six Flags America), Georgia (Six Flags Over Georgia), Missouri (Six Flags St. Louis), Texas (Six Flags Over Texas and Six Flags Fiesta Texas), and California (Six Flags Magic Mountain and Six Flags Discovery Kingdom), will be treated to an exciting preview of the movie on Six Flag TV, the in-park television network that entertains the parks’ millions of guests as they stroll throughout the parks.

On Saturday and Sunday, December 10 and 11, and again on December 17 and 18, volunteers will be on hand to explain and demonstrate how to play the Yu-Gi-Oh! TRADING CARD GAME.  Tagged as “Demo Days,” the on-site demonstrations are designed to engage new enthusiasts for the brand while also reminding fans of the upcoming movie’s U.S. release on January 27, 2017.

Jennifer Coleman, Vice President of Marketing and Licensing, said: “We are pleased to present this exciting opportunity for people to experience the world’s favorite trading card game at their favorite theme park. Six Flags is the perfect promotional partner for us to engage with our fans, gain new fans and share in the excitement over the Yu-Gi-Oh! THE DARK SIDE OF DIMENSIONS movie release.”

Stephanie Borges, Vice President of North America Strategic Marketing and Partnerships Corporate Alliances, Six Flags adds: “Six Flags is excited to host this unique promotion for the Yu-Gi-Oh! brand.  We are always looking for fun and entertaining ways to enhance the park experience and we believe our guests will enjoy playing the game with family and friends.” 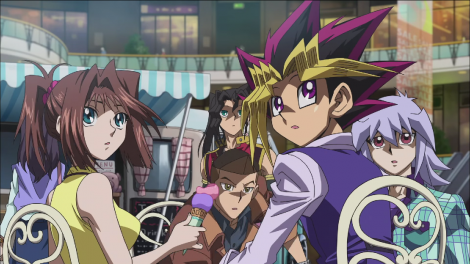 ABOUT 4K MEDIA INC.
New York City-based 4K Media Inc. (a wholly owned subsidiary of Konami Digital Entertainment, Inc.) is a brand management and production company best known for its management of the Yu-Gi-Oh! franchise outside of Asia. This year, the Yu-Gi-Oh! anime brand celebrates its 15th anniversary of entertaining and engaging young audiences in the United States and globally outside of Asia.

2017 marks its next exciting theatrical release, Yu-Gi-Oh! THE DARK SIDE OF DIMENSIONS. Beyond Yu-Gi-Oh!, 4K Media is also actively expanding both its licensing and production slate to incorporate other brands including the recently announced representation of Rebecca Bonbon. The Yu-Gi-Oh! website is available at www.yugioh.com