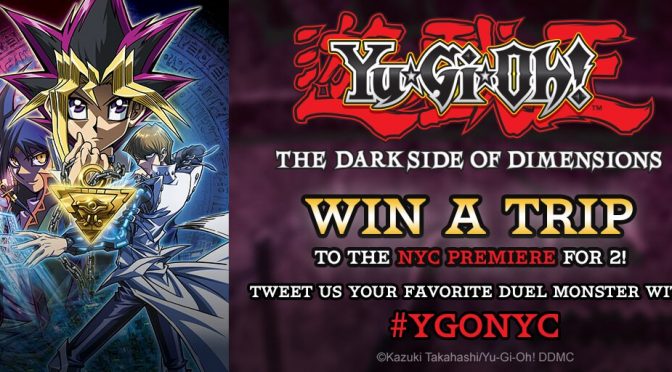 Crunchyroll and 4K Media have teamed up to offer some special prizes for you! It’s almost a month away from the release of the movie, Yu-Gi-Oh! THE DARK SIDE OF DIMENSIONS, in January 2017 in U.S. and Canada!  Crunchyroll and 4K Media is sending a lucky winner on a trip to New York City to see the movie premiere during the period of January 23, 2017- January 25, 2017, with the movie screening to be held on January 24, 2017.

ONE lucky person will win a Trip to New York City:

To get a chance to win the trip to New York City, go on Twitter, tweet @Crunchyroll your favorite Duel Monster, and add hashtag #ygonyc between now until December 16, 2016. Winners will be picked at random by Crunchyroll (and 4K Media), and will be announced on December 20, 2016. Note: contest only open to US residents.

Details and rules on www.cruncheroll.com