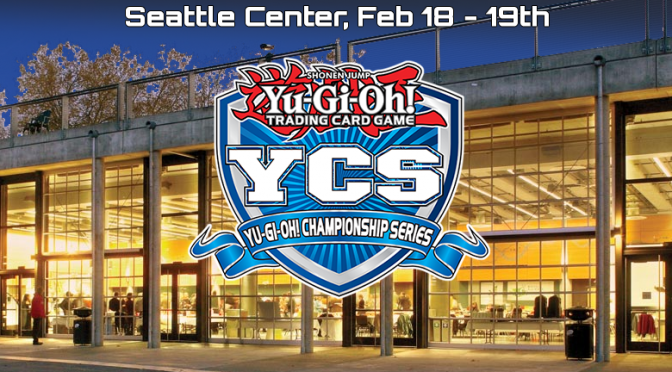 THE EMERALD CITY WELCOMES DUELISTS FROM ALL OVER THE PACIFIC NORTHWEST & BEYOND TO KONAMI’S Yu-Gi-Oh! CHAMPIONSHIP SERIES SEATTLE FEBRUARY 18-19th

El Segundo, Calif. (January 23, 2017) – Continuing the 2017 North American Dueling season in a big way, Konami Digital Entertainment, Inc. (KONAMI) is excited to bring its premier-level Yu-Gi-Oh! CHAMPIONSHIP SERIES (YCS) to the Seattle Center February 18-19. This weekend-long tournament gives hundreds of Yu-Gi-Oh! TRADING CARD GAME (TCG) Duelists from across the Pacific Northwest and Western Canada a chance to gauge how well their Deck-building and game strategy skills stack up as they compete for the Championship and top prizes.

Anticipation will be running high as Duelists compete for this season’s exclusive YCS prize card that will be awarded to the weekend’s top finishers – Number 93: Utopia Kaiser. Different from the regular cards found in booster packs and other Yu-Gi-Oh! TCG products, Number 93: Utopia Kaiser can only be obtained by finishing in the top three spots at a Main Event of a YCS, or by winning a special Public Events playoff tournament. This makes Number 93: Utopia Kaiser highly coveted by the mass of Duelists around the world that will participate in the high-level competitive YCS events during the course of the season.

Pre-registration for YCS Seattle will run from 3 p.m. – 7 p.m. on Friday, February 17 and registration will continue promptly at 8 a.m. on Saturday, February 18 and Round One will start at 10 a.m. Upon registering, Duelists will receive five of the recently released Raging Tempest booster packs for participating in KONAMI’s YCS Seattle. Players will use their constructed Decks all the way to the final match. The top-ranked YCS finishers will earn invitations to participate in their 2017 World Championship Qualifier. Duelists can find the answers to many of their questions here: YCS_Seattle.

Accompanying the Yu-Gi-Oh! CHAMPIONSHIP SERIES Seattle’s Main Event, KONAMI will also be conducting Dragon Duels (for Duelists born in 2004 or later). The Dragon Duel tournaments on both Saturday and Sunday will be sealed using Battle Pack: Epic Dawn, where each Duelist is given ten sealed Battle Packs to make a new Deck.  The top four finishers in the Dragon Duel events will receive a Dragon Duel Medal, a Regional Deck Box, a Dragon Duel T-shirt, and a 2017 Regional Game Mat. Top-ranked finishers will also earn an invitation to their 2017 Dragon Duel World Championship Qualifier.

For those unable to attend Yu-Gi-Oh! CHAMPIONSHIP SERIES Seattle, Duelists can follow the live stream on the official Yu-Gi-Oh! channel on Twitch (https://www.twitch.tv/officialyugiohchannel/) and

Youtube (https://www.youtube.com/user/OfficialYuGiOhTCG), as well as round-by-round online coverage of the event at  www.yugioh-card.com/en/events.