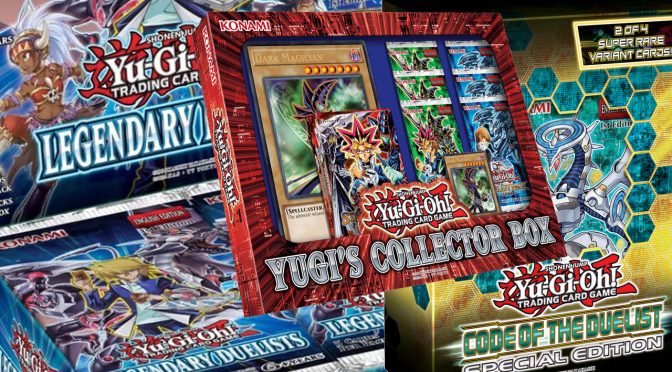 As August is drawing to a close and the Labor Day holiday is coming down the pike, we’re very excited to share what’s coming up in September from Yu-Gi-Oh! TRADING CARD GAME!

Be sure to come back as each new item releases for our reviews and first look thoughts. Read the full press release below:

POWERFUL LEGACIES ARE BACK AND STRONGER THAN EVER IN THE Yu-Gi-Oh! TRADING CARD GAME!

El Segundo, Calif. (August 25, 2017) – Heroes, villains, and some of the greatest monsters of all time return to the Yu-Gi-Oh! TRADING CARD GAME (TCG) this September, as three massive releases from Konami Digital Entertainment, Inc. (KONAMI) pay homage to the past and revisit recent hits – Legendary Duelists, Yugi’s Collector Box, and Code of the Duelist Special Edition! 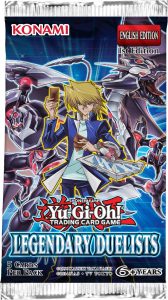 Classic Duelists and their signature strategies are reborn in the Legendary Duelists booster pack! Decks used by Mako Tsunami, Mai Valentine, and even Joey Wheeler all get big upgrades, with brand-new cards for Mako’s Umi Deck, Mai’s Amazoness arsenal, and Joey’s Red-Eyes forces. The line is complete: The Legendary Fisherman II bridges the gap between the original and The Legendary Fisherman III, searching a Level 7 WATER monster like Fisherman III from your Deck when it’s defeated.  Fisherman II can resist monster effects and help you Summon the next in the line. Cards like Amazoness Princess bring new dimensions to Mai’s Amazoness strategy, searching “Amazoness” cards and calling powerful warrior queens into battle, straight from your Deck.  And monsters like Gearfried the Red-Eyes Iron Knight power up Joey’s Red-Eyes with new Equip Card tricks, while the mighty Fusion Monster Red-Eyes Slash Dragon takes fallen monsters as riders, using them to negate your opponent’s moves! 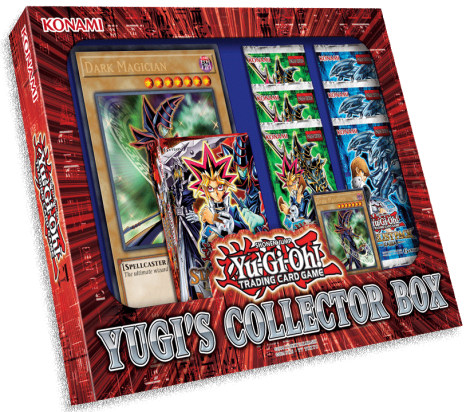 With Yugi’s rivals back and better than ever, the King of Games isn’t far behind!  Yugi’s Collector Box is all about the original hero himself: the ultimate Yugi-fan collection comes with a revamped version of the Deck that started it all, Starter Deck: Yugi Reloaded. You can customize your Yugi Reloaded Deck with three packs each of Duelist Pack: Kaiba and Duelist Pack: Yugi and create your own Dueling style – you could find everything from Dark Paladin to Crush Card Virus to the legendary Chaos Emperor Dragon! Dark Magician fans are in luck too: Starter Deck: Yugi Reloaded comes with two copies of Yugi’s signature monster, and Yugi’s Collector Box includes a special Ultra Rare version with variant art to finish out your playset, plus an Oversized Dark Magician card – the perfect way to commemorate the ultimate wizard. 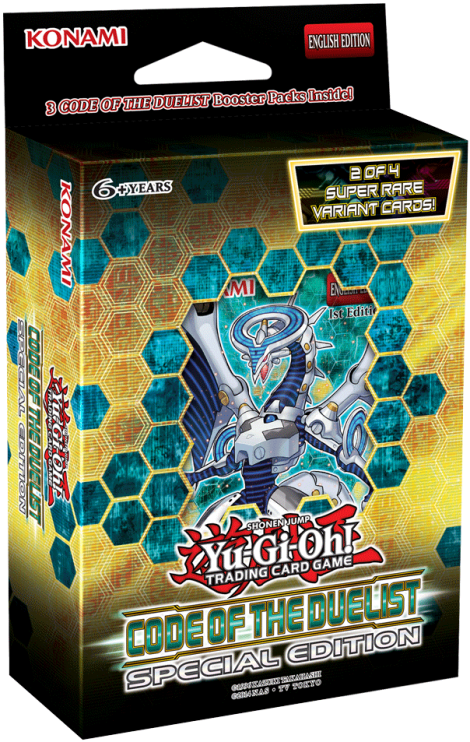 Code of the Duelist revolutionized Dueling forever with the introduction of Vendreads, Goukis, World Chalice, Trickstars, and new Link Monsters.  The Twilightsworn added a dark new chapter to the Lightsworn legacy with new monsters like Lumina, Twilightsworn Shaman and Punishment Dragon, while Spellbook of Knowledge, Topologic Bomber Dragon, and Firewall Dragon made Duelists take immediate notice. Now the Code of the Duelist Special Edition box gives Duelists a second chance to collect the hottest cards from the set, and at an even better price.  Each Code of the Duelist Special Edition also includes one of two Super Rare preview cards from October’s Circuit Break booster pack, either Mistar Boy or Cyberse Beacon, as well as one of two Super Rare variant cards: Skull Meister or the coveted Solemn Strike!

Duelists can now watch episodes of the exciting new Yu-Gi-Oh! animated series, Yu-Gi-Oh VRAINS, available subtitled on Crunchyroll. The series will be simulcast with a new episode available one hour after it is broadcast in Japan, at 6:25AM EST (Simulcast currently available in the US and Latin America) . Watch here: http://www.crunchyroll.com/yu-gi-oh-vrains!