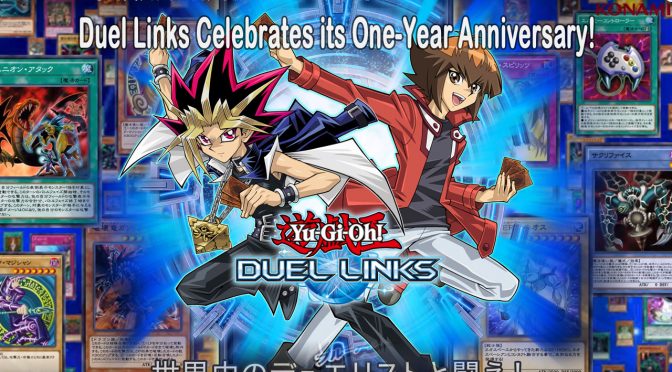 KONAMI Offers Duelists a Variety of In-Game Events and Promotions

Since the game’s launch one year ago, there have been more than 9.5 billion Duels played and 1.1 billion card packs opened. Among the card packs opened, one of the rarest cards, prismatic Blue-Eyes White Dragon has been obtained by 45,891 of the 60 million Duelists. 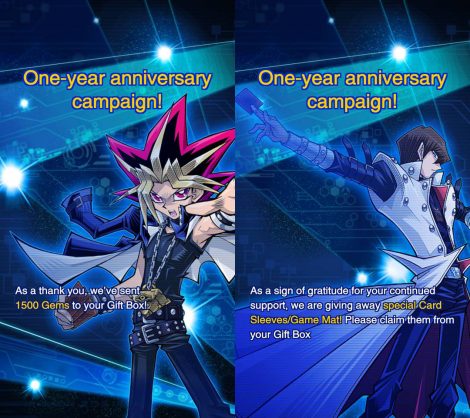 To celebrate its one-year anniversary, Yu-Gi-Oh! Duel Links will feature a variety of special in-game events and promotions for a limited time, including:

Based on the official Yu-Gi-Oh! TRADING CARD GAME, Yu-Gi-Oh! Duel Links brings the popular game to life on mobile devices and on PC. Duelists can kindle the spirit of Yami Yugi, Seto Kaiba and other beloved characters from the Yu-Gi-Oh! franchise in competitive card battle action. In the PC version of Yu-Gi-Oh! Duel Links, players can retain their progress from the mobile version of the game and Duel against other mobile and PC players.

The Yu-Gi-Oh! series is based on the manga Yu-Gi-Oh! (by Kazuki Takahashi), which was serialized in SHUEISHA Inc.’s Weekly Shonen Jump magazine from 1996, and is now on the fifth iteration of the “Yu-Gi-Oh!” animated series (currently airing on TV Tokyo-affiliated channels). KONAMI released the first console game in 1998, and the series, including the trading card game, is still enjoyed by countless customers worldwide. KONAMI continues to develop and distribute a wide range of Yu-Gi-Oh! content to deliver the fun and excitement of the series to customers around the globe.