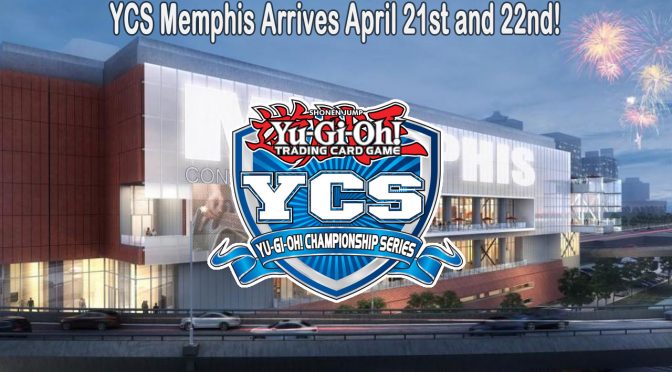 Yu-Gi-Oh! TRADING CARD GAME is excited to share that its Yu-Gi-Oh! Championship Series (YCS) is coming to the Memphis Cook Convention Center on April 21-22.

YCS Memphis will test the wits, nerves, and ingenuity of some of the world’s greatest Duelists for two full days, on the way to inaugurating another in a long string of time-honored Champions. Duelists in the YCS main event will compete for one of the highest honors in all of Dueling: the prestige of a YCS win and the title of Champion. Competitors will also vie for a huge spread of prizes, including the YCS Prize Card Number 89: Diablosis the Mind Hacker!

El Segundo, Calif. (April 13, 2018) – Get ready Tennessee Duelists, because the Yu-Gi-Oh! Championship Series (YCS) is coming to the Volunteer State! Konami Digital Entertainment, Inc. (KONAMI) is proud to invite hundreds of the Yu-Gi-Oh! TRADING CARD GAME’s (TCG) greatest competitors to attend the Memphis Cook Convention Center for a “throwdown” of massive proportions.  On April 21 and 22, YCS Memphis will test the wits, nerves, and ingenuity of some of the world’s greatest Duelists for two full days, on the way to inaugurating another in a long string of time-honored Champions.

Over the last two months, YCS titles have been won in Atlanta, Bochum (Germany), San Jose (Costa Rica), and Utah, as Duelists duked it out with every Deck under the sun.  Trickstars, Pendulum Magicians, Zefras, Metalfoes, World Chalice, Invoked, Dinosaurs, ABC’s, and more have all captured their share of tournament glory so far this year.  But as Duelists devote more time to their favorite strategies, YCS Memphis is set to throw a curve ball into the mix – Structure Deck: Lair of Darkness launches one day before the tournament.  Will new cards like Darkest Diabolos, Lord of the Lair and Grinning Grave Virus shake things up in the Volunteer State?  Dueling’s finest will be on hand to find out!

Duelists in the YCS main event will compete for one of the highest honors in all of Dueling: the prestige of a YCS win and the title of Champion.  Competitors will also vie for a huge spread of prizes, including the YCS Prize Card Number 89: Diablosis the Mind Hacker!  The winner of YCS Memphis will earn an exclusive Ultra Rare copy while 2nd and 3rd place finishers win Super Rares.

When the weekend is over and one winner is left standing, the Champion of YCS Memphis gets paid travel and accommodations to their 2018 World Championship Qualifier (WCQ), where they’ll be invited to compete with VIP status. Both Finalists will win exclusive YCS branded premium Messenger Bags, and the full Top 8 will celebrate with high-end PlayStation®4 gaming systems for their efforts.  Every Duelist who makes it through the Swiss rounds to the Top 32 receive YCS Top Cut Game Mats featuring Number 89: Diablosis the Mind Hacker – a coveted prize only given to those who reach the Top Cut at a YCS – as well as World Qualifying Points, Ultimate Duelist Series Points, and invitations to their WCQ tournaments.

Pre-registration for YCS Memphis will run from 3 p.m. – 7 p.m. on Friday, April 20 at the Memphis Cook Convention Center.  All Duelists who pre-register and turn in their valid Deck list on Friday will receive one of the Yu-Gi-Oh! branded Attribute Dice, randomly blind-bagged. Registration will reopen at 8:00 a.m. on Saturday April 21, continuing to 9:45 a.m, with Round 1 beginning promptly at 10 a.m. All Duelists will receive five booster packs of Extreme Force upon registering, and while supplies last, registrants can also get “Yugi Hair” to wear at the event.  The YCS Memphis main event tournament will be played in the Constructed Advanced Format. Attendees can find the answers to many questions here: http://www.yugioh-card.com/en/events/2018/YCS-Memphis_FAQ.html 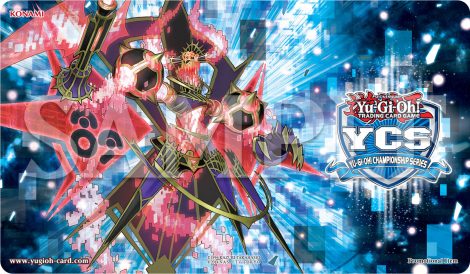 Players that make the Top Cut at the YCS will also be awarded World Qualifying Points based on standings.

Duelists can now watch episodes of the exciting new Yu-Gi-Oh! animated series, Yu-Gi-Oh! VRAINS, available subtitled on Crunchyroll. The series will be simulcast with a new episode available one hour after it is broadcast in Japan, at 6:25AM EST (Simulcast currently available in the US and Latin America).