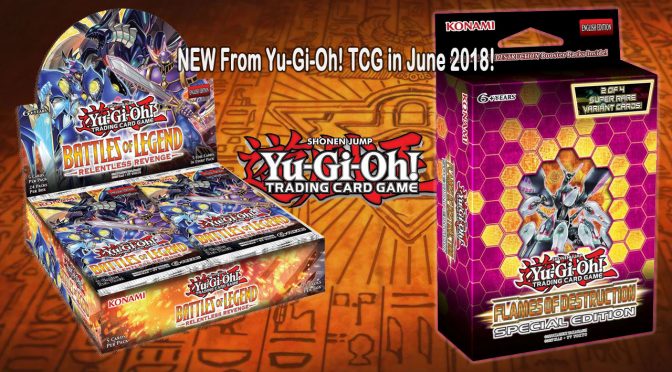 We are excited to brighten your day by sharing the excitement of Yu-Gi-Oh! TRADING CARD GAME’s newest product releases for the month of June!

Hitting shelves on June 29, Battles of Legend: Relentless Revenge is an all-foil set with 105 cards total: each pack contains 4 Ultra Rares and 1 Secret Rare. Battles of Legend: Relentless Revenge brings with it new “Timelord” monsters from Yu-Gi-Oh! 5D’s, new Xyz Monsters from Yu-Gi-Oh! ZEXAL, and brings to life long-coveted cards from the deck of Leon von Schroeder, such as Golden Castle of Stromberg, Prinzessin and Glass Slippers.  (MSRP: $3.99 per 5-card pack)

Here is the official press release sent out on June 4th, 2018:

THE FLAMES RISE AS OLD VENDETTAS BURN BRIGHT THIS SUMMER IN THE Yu-Gi-Oh! TRADING CARD GAME!

El Segundo, Calif. (June 4, 2018) – The searing fires of competition ignite, and forgotten histories heat up once again, in the Yu-Gi-Oh! TRADING CARD GAME (TCG) this June, as Konami Digital Entertainment, Inc. (KONAMI) presents two new releases!  Flames of Destruction Special Edition delivers more Altergeist action, more Gouki glory, and more groundbreaking Trap Cards, while Battles of Legend: Relentless Revenge revives some of the greatest cards from Dueling’s storied past, bringing some of the most anticipated fan-favorite cards to life for the first time ever. 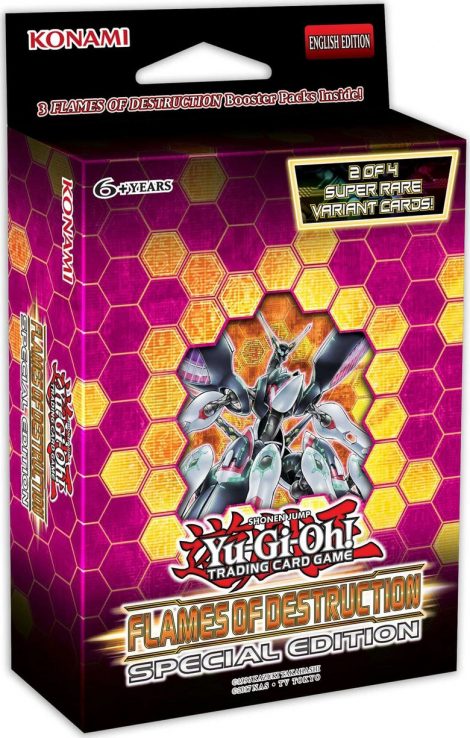 Flames of Destruction shook up tournament scenes across the globe when it arrived in May.  The “Knightmare” Link Monsters made an immediate impact powering up strategies like Trickstars, SPYRALs, and the Invoked, while new support pushed the “Altergeist” theme to the forefront of competition.  Cards like Knightmare Gryphon, Altergeist Multifaker, and the powerful new Infinite Impermanence are some of the hottest of the year, and now you’ll have another chance to collect them with Flames of Destruction Special Edition. 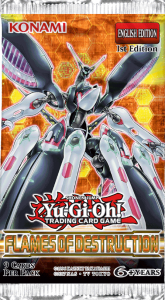 Each Flames of Destruction Special Edition comes with three packs of Flames of Destruction, as well as 1 of 2 Super Rare variant cards to power up the new Elementsaber theme, plus 1 of 2 Super Rare preview cards from July’s Cybernetic Horizon booster.  Moulinglacia the Elemental Lord and Grandsoil the Elemental Lord are incredible boss monsters played in Elementsabers and beyond, and each Flames of Destruction Special Edition includes one of them –good news for Elementsaber fans and Mermail Duelists alike.  Then, you’ll get a jump on the Mekk-Knight support card World Legacy’s Memory or the table-turning battle buff Universal Adapter, a powerful Trap that boosts your smallest monsters to the size of the biggest behemoths on the field. 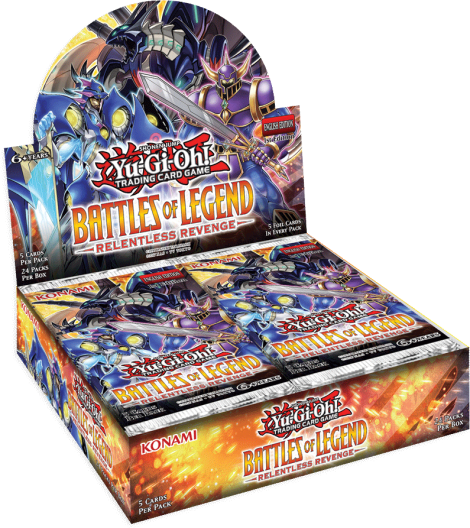 Battles of Legend: Light’s Revenge was one of 2017’s biggest releases, so get ready for a bigger, badder sequel!  Battles of Legend: Relentless Revenge ups the ante with incredible new “Timelord” monsters from Yu-Gi-Oh! 5D’s, stunning new Xyz Monsters from Yu-Gi-Oh! ZEXAL, and a wealth of most-wanted tournament cards from some of the most competitive tournament Decks this year. 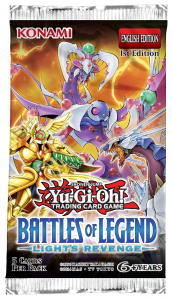 Fans of the classic Yu-Gi-Oh! series are in for a treat too, as the long-awaited Golden Castle of Stromberg, Prinzessin, Glass Slippers and more signature cards played by Leon von Schroeder finally become a  Dueling reality. It’s a fairytale come true!  Also watch out for heavy-hitters like Topologic Gumblar Dragon, Number 90: Galaxy-Eyes Photon Lord, and Duke Devlin’s high-rolling ace monster Orgoth the Relentless!  Armed with an ability that boosts its Attack Points according to a roll of the dice, Orgoth the Relentless can protect itself from destruction, draw cards, or even make direct attacks… All if the dice fall in your favor.

Additionally, Duelists can watch a new episode of Yu-Gi-Oh! ARC-V every Saturday on Nicktoons – check local listings for times. In addition, all-new Yu-Gi-Oh! ZEXAL episodes every Tuesday as well as 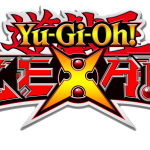 all of classic Yu-Gi-Oh!, Yu-Gi-Oh! GX, and Yu-Gi-Oh! 5D’s can be seen on www.yugioh.com in the United States. In Canada, Duelists can watch episodes of Yu-Gi-Oh! ARC-V every Friday and Saturday on Teletoon!

KONAMI is a leading developer, publisher and manufacturer of electronic entertainment properties and traditional trading card games. KONAMI’s software titles include the popular franchises Metal Gear Solid, Silent Hill, DanceDanceRevolution and Castlevania, among other top sellers. KONAMI is also the manufacturer of the wildly popular Yu-Gi-Oh! TRADING CARD GAME, which has sold more than 25 billion cards worldwide. The latest information about KONAMI can be found on the Web at www.konami.com.