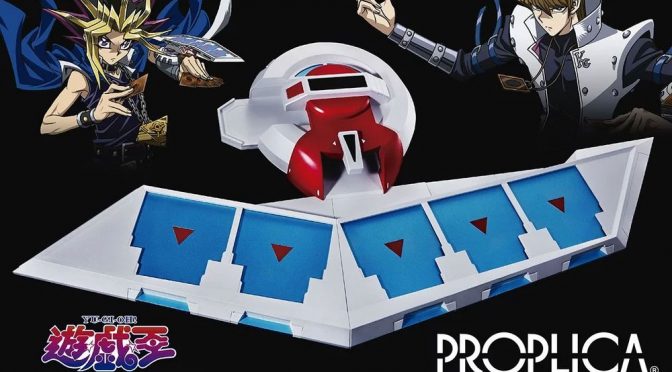 Bandai Namco announced that it will soon be releasing a new Duel Disk replica under their high-quality Proplica brand.

Announced during Jump Festa 2019, a tweet from Shueisha’s V-Jump account revealed the prototype for the Duel Disk replica and teased its imminent release with “The Emperor wearing a Duel Disk?! Today at Jump Festa, the PROPLICA Brand has announced their efforts to develop a new Duel Disk product!”

Over the years other brands have released several duel disk products, but this is the first PROPLICA version of the Yu-Gi-Oh! accessory. The Proplica line is known for its high-end replicas of anime and video game props. The new disk already seems to be a much higher quality than previous Duel Disk releases. Replica releases under Konami and Mattel were appreciated when first released back when the Battle City arc was at its peak, but soon fans of the series found the replicas to not quite be to their liking as they did not have enough room to hold their cards completely, and the Life Points counter wasn’t up to their standards.

There is currently no further information on the new Duel Disk’s release date or pricing details, as this was a prototype shown during the event, but you can see a much closer look at it above (via @chaotic_brain on Twitter).

Proplica has previously recreated and released transform and attack wands from the Sailor Moon and Cardcaptor Sakura series and the Kingdom Hearts video game series.

With the series currently celebrating its 20th Anniversary this year, Yu-Gi-Oh! is now more popular than ever. Collectors have made the merchandise even more valuable than ever as a result, and now some of the rarest cards in the trading card game are selling for ridiculous amounts.

via ANN and ComicBook.com