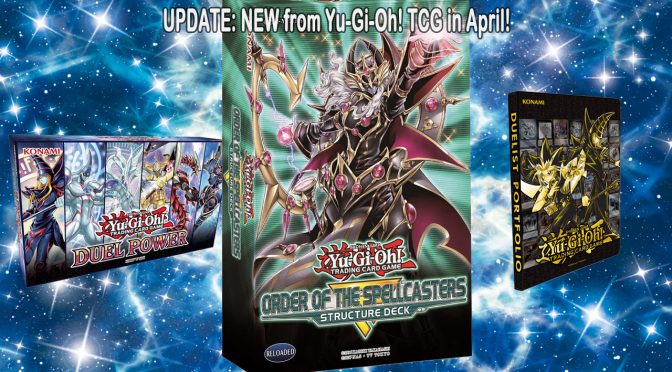 We’re excited to share some NEW details on a new upcoming product releases for Yu-Gi-Oh! TRADING CARD GAME this month.

In our previous news post we announced that launching today, April 3rd, is Duel Power, an elite collection of 100 Ultra Rares that include 40 brand-new cards destined to shake up every level of competition, plus 60 of the strongest and most sought-after cards in Dueling today. Each Duel Power collector’s set comes fully loaded with six Duel Power booster packs with 5 Ultra Rare cards per pack.

Today’s update adds that on April 19th, 2019, Duelists will be able to get their hands on Structure Deck: Order of the Spellcasters, loaded with all the arcane opportunities they’ll need to mount their magical conquest! Structure Deck: Order of the Spellcasters will include 1 Beginner’s Guide, 1 Double-sided Deluxe Game Mat/Dueling Guide, and 42 cards total: 37 Commons, 3 Super Rares, and 2 Ultra Rares.

DUELING ACTION GETS BIGGER AND BETTER THIS SPRING IN THE Yu-Gi-Oh! TRADING CARD GAME!

El Segundo, Calif. (April 3, 2019) – Your favorite Decks are about to get better this Spring in the Yu-Gi-Oh! TRADING CARD GAME (TCG), as time-honored themes are reinvented and modern classics reach new heights. Konami Digital Entertainment, Inc. (KONAMI) is excited to usher in bright new futures for fan-favorite strategies from the past and present. It all starts with the Duel Power collector’s set, ramping up the action with loads of amazing new cards, and levelling the playing field with awesome reprints.

Duel Power heralds the debut of stunning new Link Monsters like Platinum Gadget, Aromaseraphy Jasmine, Crowley, the First Propheseer, and Thunder Dragon Thunderstormech, introducing theme-stamped Link Summons to strategies that didn’t have their own Link Monsters before. And if that wasn’t enough, flexible new Link Monsters like Beat Cop from the Underworld and Security Dragon bring new combos and control moves to a cadre of different Decks.

Every Duel Power booster pack is loaded with cards to strengthen your Deck-building arsenal. Tournament mainstays like Infinite Impermanence, Evenly Matched, and Card of Demise return in all their Duel-dominating glory, “discard” Effect Monsters like Ghost Ogre & Snow Rabbit and Ghost Belle & Haunted Mansion make encore appearances, and even Extra Deck powerhouses like Trickstar Holly Angel, Naturia Beast, and the stunning Borreload Dragon are back.

Joining the past with the present, Duel Power also re-envisions some of the most famous cards in Dueling history. Yugi’s Dark Magician is reborn as the Ritual Monster Magician of Chaos, Zane’s Cyber Dragon strategy gets supercharged with Cyber Dragon Nachster, and Signal Warrior celebrates the Duel Wheeling heroes of Yu-Gi-Oh! 5D’s. Yuma’s Number 39: Utopia reemerges as Number 39: Utopia Double, and Odd-Eyes Advance Dragon erupts from Yu-Gi-Oh! ARC-V to burn through your opponent’s monsters and Life Points. Meanwhile some of the biggest Decks from Yu-Gi-Oh! VRAINS continue their reign with new cards like Gouki Cage Match and Trickstar Foxglove Witch.

Protect and display your favorite cards with accessories that showcase some of Dueling’s most iconic cards with the Golden Duelist Collection. From Dark Magician Girl, Blue-Eyes White Dragon and Exodia the Forbidden One, to Rescue Cat, Black Rose Dragon and El Shaddoll Construct, the Golden Duelist Collection draws together dozens of fan-favorite Monsters, Spells and Traps in a rich black and gold motif punctuated by a timeless image of Yugi and the Dark Magician.

The Golden Duelist Collection Duelist Portfolio arrives April 5, and includes 10 pages with 9 card pockets per page, displaying up to 180 cards. MSRP: $9.99 per Portfolio.

From there the season turns to the ancient and arcane, as some of Dueling’s greatest sorcerers and spellcasters return to claim their rightful place. Structure Deck: Order of the Spellcasters assembles a cast of classic conjurers and imbues them all with a new form of trickery: abilities that let them change from powerful monsters into raw magic and back again. Fan-favorites return as Pendulum Monsters, capable of leaping in and out of your Spell and Trap Zones with surprising Special Summon effects, all powered by the “Spell Counter” mechanic. Endymion, the Master Magician makes a revolutionary return, demolishing the field when he arrives and negating your opponent’s Spells and Traps. The new leader of the Magical City uses Spell Counters as sorcerous shields to protect himself from targeting and destruction, and should he ever be destroyed you’ll search any Normal Spell card you want, straight from your Deck.

Endymion’s acolytes are all fierce Pendulum Monsters that Special Summon not only themselves, but more support from your hand, Main, and Extra Deck. A new Link Monster joins the battle to make even bigger plays, turning your Spell Counters into raw destructive power while new Spell Cards let you search and reuse your most powerful Spellcasters (all while helping you gather more Spell Counters). Combined with popular Spell Cards like Left Arm Offering, Spellbook of Secrets, and the peerless Pot of Desires, Structure Deck: Order of the Spellcasters is loaded with all the arcane opportunities you need to mount your magical conquest.

About KONAMI
KONAMI is a leading developer, publisher and manufacturer of electronic entertainment properties and traditional trading card games. KONAMI’s software titles include the popular franchises METAL GEAR SOLID, Silent Hill, DanceDanceRevolution and Castlevania, among other top sellers. KONAMI is also the manufacturer of the wildly popular Yu-Gi-Oh! TRADING CARD GAME, which has sold more than 25 billion cards worldwide. The latest information about KONAMI can be found on the Web at www.konami.com.