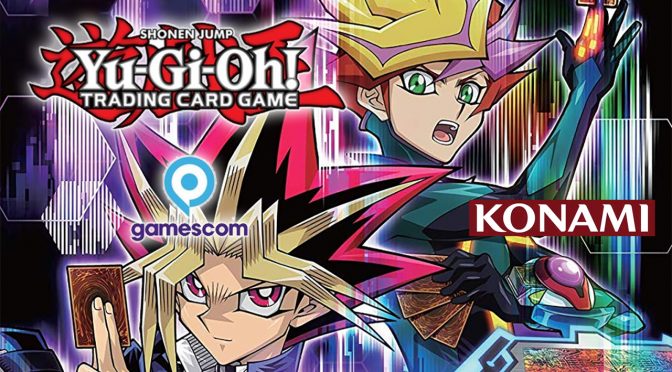 Konami has announced details of the activities and products that will be possible to play at this year’s Gamescom (August 20-24) in Cologne, Germany.

Konami is pleased to announce its complete program for Gamescom 2019, revealing all the news that will be presented on eFootball PES 2020, Contra: Rogue Corps and Yu-Gi-Oh! TCG.

The German game fair will open its doors on 19 August.

There will be a stand dedicated to Yu-Gi-Oh! TRADING CARD GAME (Hall 5.2, C10) which will present the latest news of the popular universe of Yu-Gi-Oh! Trading Card Game, where Duelists can duel and trade with each other, buy new items for their deck and use a photo box to find out how they might look on a giant card in the game.

In the stand of YuGiOh! you can also find:

In addition to the YuGiOh! and those open to the public, KONAMI will host private media appointments and other insiders at their business booth in Hall 4.2.

The references of the stands are as follows:

After the demo release in late July, PES fans will have the opportunity to try out the latest version of the eFootball PES 2020 game, and play single and co-op games at the KONAMI booth (Hall 9, B30).

Attendees will also be able to participate in an exclusive competition created for GamesCom in the Matchday area. Fans can choose between FC Schalke 04 and FC Bayern and support their team to become the winners every day. The results of all the games played during the day will be accumulated to form a global score and daily prizes will be available as VIP tickets for home games for FC Schalke 04 and FC Bayern.

The normal daily activities on stage during the fair will include the busiest matches of Matchday as well as the challenges “Beat a Pro” against export athletes. The eFootball PES stage will be animated by the presence of sports journalist Johannes Meinow and all those visiting the stand will be invited to take part in the challenges.

CONTRA fans will be able to try a playable version of CONTRA: ROGUE CORPS online in co-op for four players and can take a picture with the new character, the scientist Kurt Steiner, otherwise known as Hungry Beast. During the fair, it will be possible to take part in a hashtag challenge and a selection of influencers will be present to take a photo with those present.