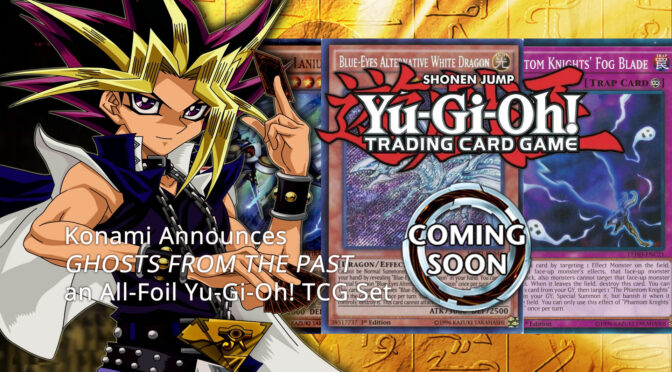 Konami recently announced a new Yu-Gi-Oh! TCG set called Ghosts from the Past due to release on March 26, 2021. The new booster set, Ghosts from the Past, contains 132 all-foil cards and is set to introduce new cards for nine current strategies as well as introduce two brand-new strategies for Duelists to explore. The existing strategies include Cipher, Dragunity, and Shaddoll, while the new strategies include Sunavalon from VRAINS and a mystery one not from the anime. Sunavalon is a Plant-type archetype used by the villain Spectre with a focus on Link Summoning.

Official Ghosts From the Past information:

History comes to life in Ghosts From the Past! This 132-card all-foil collector’s set bolsters 9 popular themes from the past, introduces 2 brand-new themes, helps you build some of the Decks featured both in this booster and in recent Core Boosters, and to top it all off, debuts 5 new Ghost Rares that’ll be must-haves for your collection!

Two Brand-New Themes!
The villainous Spectre’s “Sunavalon” strategy from Yu-Gi-Oh! VRAINS takes root in Ghosts From the Past! This Plant-based Link Summoning theme lays out a cunning web of interconnected monster effects to trap unsuspecting Duelists. The second new theme will be a game original strategy.

Want to Try Out a New Deck?
If you thought the new Metalfoes cards in Blazing Vortex were cool but didn’t have the rest of the cards to try the Deck out, you can find them here in Ghosts From the Past. Need the original Armed Dragon LV10 to complete your Armed Dragon Deck? It’s here. You can also find cards like Raidraptor – Tribute Lanius, Dark Requiem Xyz Dragon, and Phantom Knights’ Fog Blade that you might need for that Raidraptor/Phantom Knight team-up Deck you’ve been working on since Phantom Rage released!

Glorious Ghost Rares!
Five cards in this set will appear exclusively (and rarely!) as beautiful Ghost Rares! See cards you love, like Blue-Eyes Alternative White Dragon, like you’ve never seen them before.

Ghosts From the Past has 132 cards total, with 45 new cards and 87 returning cards, 5 of which appear only as Ghost Rares. All other cards appear in the standard gold Ultra Rare technology. Each box contains three, 5-card Ghosts From the Past packs for a total of 15 cards.

The complete Ghosts From the Past set contains 132 cards:
5 Ghost Rares
127 Ultra Rares