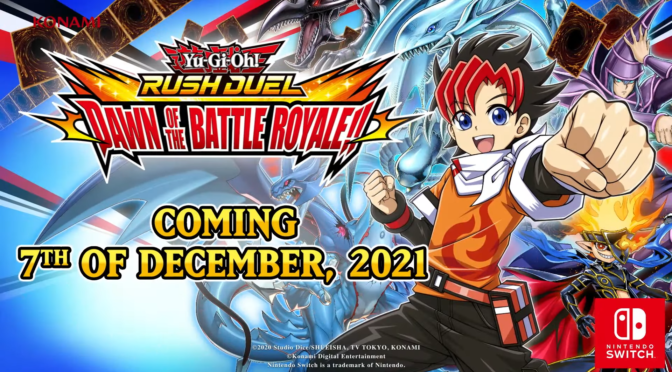 Feel the rush with a new way to play Yu-Gi-Oh! in this bestselling title

Konami Digital Entertainment, Inc., revealed that Yu-Gi-Oh! RUSH DUEL: Dawn of the Battle Royale!! comes to the Americas, Europe and Oceania on 7 December, exclusively on Nintendo Switch. To commemorate the news, KONAMI has released a trailer featuring new gameplay action.

Already a bestseller in Japan’s retail sales charts, Yu-Gi-Oh! RUSH DUEL: Dawn of the Battle Royale!! offers an exciting, brand-new way to play Yu-Gi-Oh! Summon powerful monsters repeatedly to your heart’s content, filling the field up with your cards. On your next turn, replace your hand back to full, no matter how many cards you played. The momentum can swing at any moment in this electric new Yu-Gi-Oh! title; one minute you’re in total control, the next your opponent suddenly has the advantage.

In Yu-Gi-Oh! RUSH DUEL: Dawn of the Battle Royale, Duelists can:

Based on the Duel style of Yuga Ohdo, from the Yu-Gi-Oh! SEVENS animation popularized in Japan, Rush Duel is an alternate ruleset from the standard Master Duel used in the traditional Yu-Gi-Oh! TRADING CARD GAME that’s just as entertaining and is a great entry point for any new Duelist.

Today, the popular Yu-Gi-Oh! TRADING CARD GAME is available across the globe, with products distributed in more than 80 countries and 9 languages, to be enjoyed by fans of all ages.

There is currently only one Yu-Gi-Oh Switch game out right now. Yu-Gi-Oh Legacy of the Duelist: Link Evolution showed up on the system worldwide in 2019. A third installment is also on the way. Yu-Gi-Oh Master Duel appeared at TGS 2021. It will appear on the Switch, other major consoles, PCs, and mobile devices.