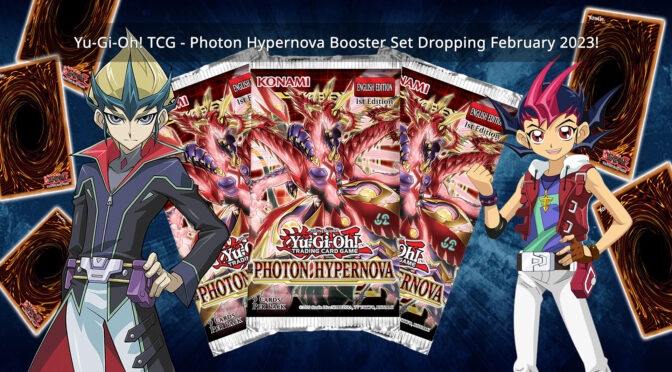 Prepare for galactic chaos to erupt with Photon Hypernova an upcoming product release from the Yu-Gi-Oh! TRADING CARD GAME arriving on Friday, February 10, 2023:

Photon Hypernova is the first Core Booster of 2023 and it features a 100-card set with new cards for Kite Tenjo’s “Photon” and “Galaxy” strategies from Yu-Gi-Oh! ZEXAL!

We have the full product fact sheet as released by Konami:

Galactic chaos erupts in February with Photon Hypernova, the first Core Booster of 2023 for the Yu-Gi-Oh! TRADING CARD GAME (TCG)! This 100-card set lets your Deck shine brighter than ever before with brand-new cards for Kite Tenjo’s “Photon” and “Galaxy” strategies from Yu-Gi-Oh! ZEXAL! Expect the unexpected in Photon Hypernova with powerful new cards to discover that are truly out of this world!

Here is just some of what you can look forward to:

The Photon Hypernova booster set has a MSRP of $4.49 per pack and contains 100 new cards, including: