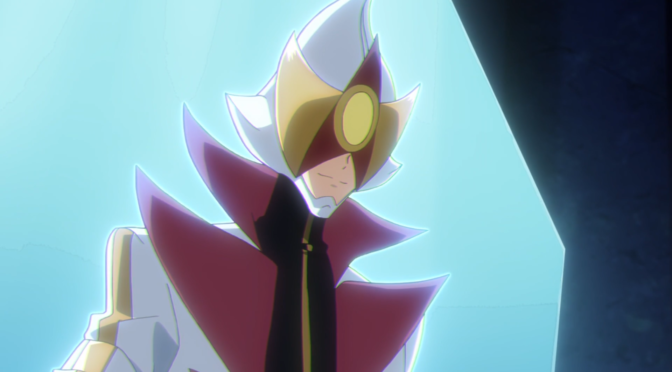 The Hologram Man is commonly known as an urban legend in Goha City challenging duelists to test them to see if they’re worthy to be known as the ‘King of Duels’.

The Hologram Man appears as a white cloaked man having on a black jumpsuit situated with a yellow vertical line trailing from his chest downward to his belt which is yellow, and having a sphere like symbol on it, with his white cloak pulled back at the chest showing the inside is red (and in some cases dark pink), with yellow lining on his sleeves, and and gold like arm bracelets that is above his elbows, with lines at the side of his legs trailing down to his boots that are also white, and having two yellow stripes at the top, with his sleeves’ cuffs being yellow along with white gloves, and a yellow symbol on them. He also has white hair that sticks out, and having on a red mask with what looks like a big yellow eye like visor with a white circle with a yellow outer layer.center prong and gold outer prongs.

Despite being supposedly merely a hologram, the Hologram Man is shown to be capable of emoting to a degree. He is intrigued by Yuga Ohdo’s Rush Dueling, believing it to be a dynamic form of Dueling and adapts to the format quickly.

The Hologram Man uses a “Blue-Eyes” Deck capable of summoning the famed “Blue-Eyes White Dragon” at a fast rate with the aid of the Rush Duel Rules, and supporting it with his Spells or Trap Cards to quickly destroy his opponent’s monsters, and use “Blue-Eyes” for a quick beatdown strategy.