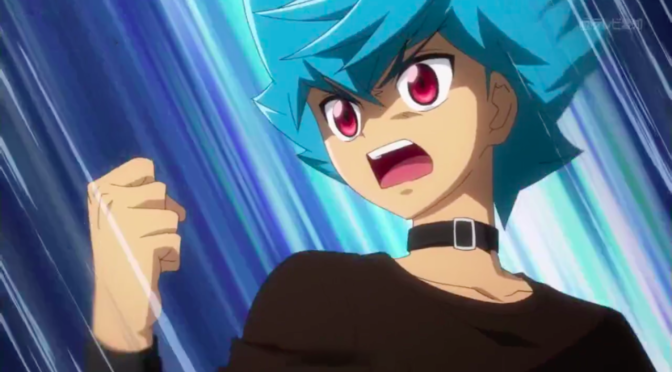 Luke is an ambitious youngster determined to become the “King of Duels”, he went to big lengths to polish his Dueling skills even training against professional adults. Luke has a tendency to exaggerate his accomplishments, which his group of friends usually figure out quickly. Luke is highly confident of his skills as a Duelist, he proclaimed himself to be “Number One Duelist of Goha 7th Elementary”.

Luke is a young boy with light-blue hair and red eyes. He wears a dark-brown shirt with a red-colored gear on a spike design, khaki pants with a black belt and black shoes with blue stripes. He also sports many accessories: a black collar around his neck, a purple-wrist watch and a blue knot on his left hand, a black wristband on his right arm, a chain tied to his right waist and a black case around his left knee.

After learning about Yuga’s desire to create Rush Duel, Luke became very interested in the idea and feels that Rush Duel could be the key to acclaim the title of “King of Duels”. Although Luke has a personal interest in Rush Duel to further his ambitions, he’s nevertheless he’s a loyal friend to Yuga and chose to support Yuga’s decision to make Rush Duel public knowledge despite knowing that they could get in trouble if Goha Corporation finds out that it was them who installed the Rush Duel rulings.

Luke is highly distrustful of Goha Corporation as he suspects they’ll attempt to shut down Rush Duels and by extension ruin his chance to become “King of Duels”. He can be rather paranoid over anything that he perceives as an attempt by Goha to destroy Rush Duels, even accusing his own friends of being Goha spies if they show any form of suspicious behavior.

Luke is a technophobe that would rather destroy electronics and other machines than learn them.

Tatsuhisa has the ability to disable electronic devices. However, he can do so at most twice per day.

Luke plays a Dragon Deck. His main strategy is allowing his monsters to attack twice each turn to damage the opponent while destroying the opponent’s Spells and Traps that might stop his attacks.