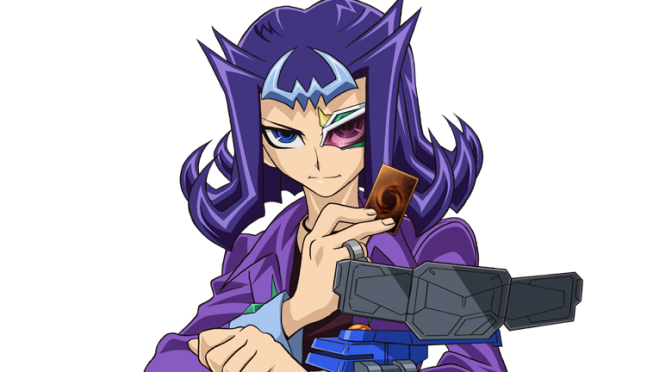 Reginald Kastle, known as Ryoga Kamishiro
( , Kamishiro Ryōga) in the manga and Japanese version and nicknamed “Shark” (シャーク, Shāku) in all versions, is one of Yuma Tsukumo’s close friends and rivals. He was originally an arrogant and callous person, but has grown quite humble. He is later revealed to be Nash (Nasch (ナッシュ, Nasshu) in the Japanese version), the leader of the Seven Barian Emperors. Determined to not let tragedies befall his people again, he betrayed Yuma and his friends to safeguard the Barian World. 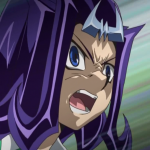 He is the only Barian Emperor not to be absorbed by Don Thousand, as well as being the only Barian whose original memories were not altered. He later vanished after losing to Yuma in a Duel that had the Human, Astral and Barian Worlds at stake. He along with the Seven Barian Emperors were revived by the Numeron Code.

Reginald “Shark” Kastle has dark blue eyes, pale skin and dark purple hair, which resembles tentacles hanging down, referencing his Deck theme of aquatic creatures. These “tentacles” slightly resemble pigtails, but curl up on the end. He also has a light blue “crown” in front of his forehead. His accessories include a grey, shark tooth-shaped locket, which contains a family photo of his parents, as well as himself and his sister Rio Kastle as children. He also has a scar on his right shoulder. 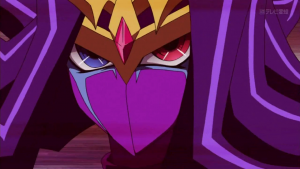 As a Barian, he has a magenta skin tone and red and blue heterochromatic eyes with aqua markings on his face. He wears a crimson cape and copper-colored guards on the wrists, shoulders, and his legs are tipped with red stones and also wears a ‘H’-shaped belt. The Barian Emblem pendant becomes larger and is engraved onto his chest. His tentacle-like hair gains more volume and he also wears a copper-colored crown piece with a red jewel on his forehead.

Shark can be classified as a typical loner, being indifferent and cool about most things, usually sporting a stoic face or scowl. He prefers to be alone and doesn’t follow a crowd. He also has displayed little interest in school, having had stopped going to Heartland Academy after his loss to Yuma. Despite Shark’s aloof and cold nature, many students at school respect his Dueling skills and he’s secretly popular with female students. 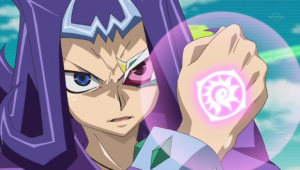 Cold and malicious, Shark flaunts his power by taking the Decks of the people he defeats, making them squirm in the process. When he becomes possessed by the “Numbers”, he becomes quite violent, destroying the scenery surrounding him throughout his first Duel.

However, he does have some honor, as he returned Bronk’s Deck upon losing to Yuma as he promised and keeping all the Decks he’d stolen from people completely intact.

Reginald “Shark” Kastle has the ability to see Astral. Shark also merges his soul with his “Number”, gaining the ability to perform Chaos Xyz Evolution with “Number 32: Shark Drake”, acquiring a purple aura while doing so. He is also able to resist the “Numbers” influence after repeated exposure, no longer feeling the effects even from a “Chaos Number”. 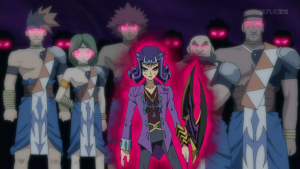 Shark has also demonstrated a few unique abilities:  he can generate a red aura around his body. The power of this aura fixed Dumon’s Baria Crystal and allowed him to regain his Barian form.

After recovering his Barian identity and powers, Nash no longer uses his mechanical Duel Gazer when he Duels; instead, his left eye acts as one. He can travel and teleport between dimensions almost instantly. He can also generate viewing screens connected to various places. Like all other Barians, he has the ability to perform a Barian Battlemorph. 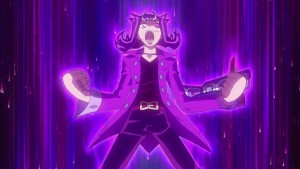 He can also perform a Chaos Draw, a power which he also granted to the other Barian Emperors. Unlike the other Emperors, he is shown to be able to perform more than one Barian’s Chaos Draw in a single Duel. As the leader of the Barians he is extremely powerful, being able to even break free from the area Don Thousand bound him in after he got sufficiently enraged. He is also able to fire electric bolts. 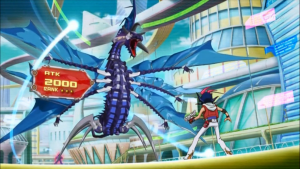 Reginald was the original owner of the very first “Number” to imprint itself on an owner, “Number 17: Leviathan Dragon”, which he lost to Yuma and Astral. 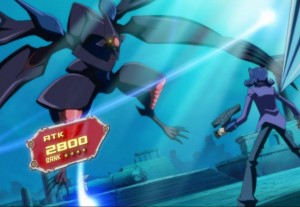 Sometime later, Trey gave him “Number 32: Shark Drake” after their Duel during the World Duel Carnival. He would eventually lose this card to Yuma as well, but later regain it after Yuma recovered it from the Sphere Field and allowed him to keep it. He also learned to evolve it into “Number C32: Shark Drake Veiss” just as Yuma had done with his own ace card. 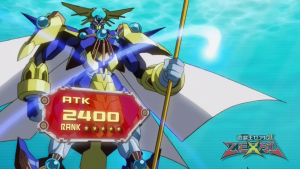 After losing to Yuma, Nash gave Astral all the remaining “Number” cards before dying, resulting in Astral obtaining all 100 base “Numbers”

Reginald “Shark” Kastle plays a Xyz WATER Deck consisting of monstrous looking sea creatures such as various races of sharks. He utilizes a Burn strategy in order to quickly gain the advantage through cards such as “Submersible Carrier Aero Shark” and “Booming Urchin”, with a focus on using Level 3 monsters, such as “Big Jaws” to Xyz Summon Rank 3 Xyz Monsters.

Shark uses cards that can counter “Numbers”, whether that be negating their effects with “Black Ray Lancer” or taking control of them with “Splash Capture”. As his Xyz Monsters are Rank 3, their ATK tends to be on the lower side. He includes cards to decrease the ATK of his opponent’s monsters such as “Needle Sunfish” and “Friller Rabca” to make up for this. A cautious Duelist, he includes many cards to counter Spells and Traps, such as “Sea King’s Verdict”, “Mystical Space Typhoon”, “Plate Salvage” and “Skull Kraken”.

Even after learning he was Nash, Shark still uses the same Deck he used before, with the addition of his own “Over-Hundred Number”, “Number 101: Silent Honor ARK” and its upgraded form. He has access to multiple “Rank-Up-Magic” cards as well and still includes Level 5 monsters in order to use “Abyss Splash”. In his final Duel, he utilizes the “Chaos Over-Hundred Number” cards and numerous “Chaos” support cards to call forth “CXyz Barian Hope”. 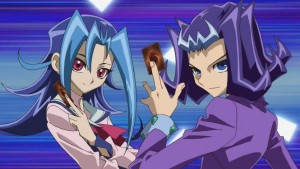 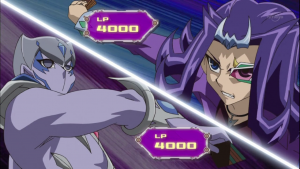