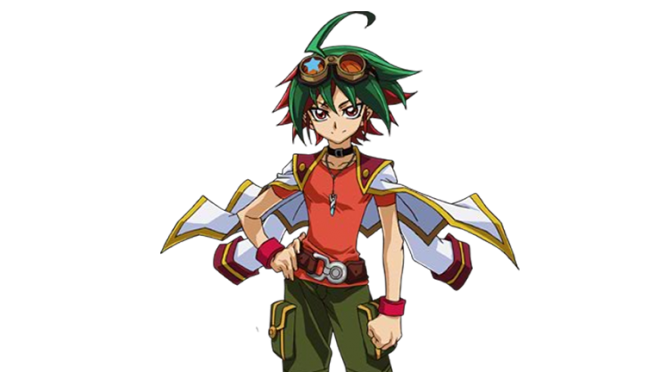 Yuya Sakaki ( , Sakaki Yūya) is the main protagonist of the Yu-Gi-Oh! ARC-V anime. He is a born-entertainer who attends the You Show Duel School to advance his Dueling expertise and become a “Dueltainer”, a specific type of professional Duelist similar to his father. He has three dimensional counterparts: Yuto (Xyz Dimension), Yugo (Synchro Dimension), and Yuri (Fusion Dimension). According to Zuzu Boyle, he and his counterparts are drawn to each other. He is one of the Lancers. 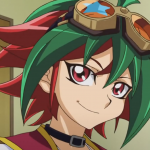 Yuya is a young teenage boy with crimson eyes, and dual-colored green and crimson hair of average length sticking out in downwards pointing spikes all around his head in a similar manner to Jaden Yuki, with the exception of one short-upwards pointing spike of green hair. He wears his good-luck charm pendant on a simple string around his neck, and a buckled choker, and a pair of golden goggles with orange lenses on his forehead, with a blue star obscuring the right lens.

A fun-loving and energetic boy, Yuya is very theatrical and loves to entertain people, traits he seems to inherited from his father, Yusho Sakaki. He idolized and loved his father very much and wishes to become an entertainer like him one day.

Similar to Yugi Muto, Yuya has shown to have a good deal less self confidence than the protagonists in the previous series. As such, when he finds himself cornered or something happens that breaks his confidence he tends to pull his goggles down so nobody can see his eyes. At times like these, he ends up recalling lessons from his father, or relies on support from his friends or mother to regain his confidence and continue the Duel. 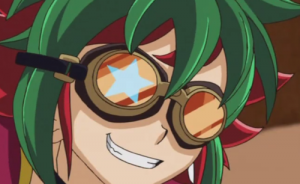 Yuya has a habit of putting his goggles over his eyes when he is either upset or embarrassed, something he did since he was young. When Yuya Duels, he announces “Ladies and gentlemen!” when he is about to perform a finishing move. In the dub, his catch phrase is “Swing into Action”.

As an Action Duelist, Yuya Sakaki is very acrobatic and fit, having participated in physical training regimes at You Show Duel School. 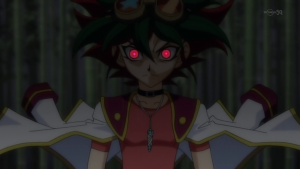 Like his dimensional counterparts, Yuya is able to enter the state of Berserk Mode, an involuntary ability that activates when he is sufficiently angered, catalyzed by either the influence of the Four Dimension Dragons or his Dimensional Counterparts. This causes him to enter a state of rage that drives him to win the Duel, no matter what it takes, and heightens his concentration to the point that he blocks out all sounds except for his opponent’s voice. When in this state his own voice becomes deeper and noticeably more menacing.

While under the control of the darkness, Yuya is able to unleash powerful shockwaves that is beyond normal for someone hailing from the Standard Dimension. 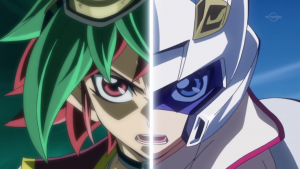 Yuya and his counterpart(s) act as if they were one person, speaking, moving, and responding in the exact same manner. When the Duel ends, both of them were unable to understand what had happened in that brief period of time, though both retain the memory of the Duel occurring. Yuya is capable of retaining his own thoughts while in sync though he gradually loses the ability to distinguish between himself and Yugo. 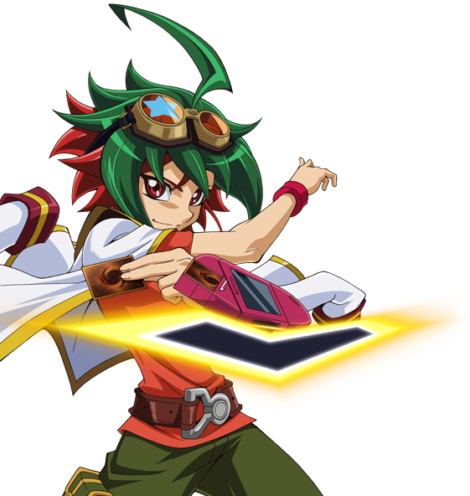 Yuya Sakaki uses a “Performapal/Magician/Odd-Eyes” Deck. The bulk of his Deck consists of “Peformapal” monsters. The “Performapals” represent his passion for entertaining others with their cartoon-like appearance and carnival attire, while his ace monster “Odd-Eyes Pendulum Dragon” represents the courage he inherited from Yusho Sakaki. They have low attack, but varied and useful battle-related effects such as allowing multiple attacks or manipulating monsters’ ATK points.

For the majority of the first arc, Yuya’s Deck focuses on Pendulum Summoning. He prefers to set the Pendulum Scale with his “Magicians” to Summon monsters of various Levels during these early episodes, but in later arcs starts to make use of narrower Scales. As the series continues, he gains access to Fusion, Synchro, and Xyz Monsters and modifies his Deck to accommodate them. His main strategy is to use the effect of “Odd-Eyes Pendulum Dragon” to deal lots of damage to his opponent.

In early arcs, Yuya’s Deck contains few Spell Cards as he prefers to rely on Action Cards. He uses his high mobility monsters to traverse the Action Field in order to search for them. In later arcs, he includes more Spell Cards in his Deck. 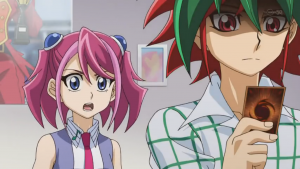 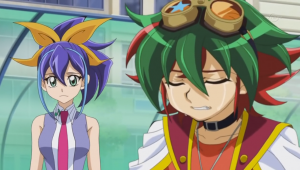