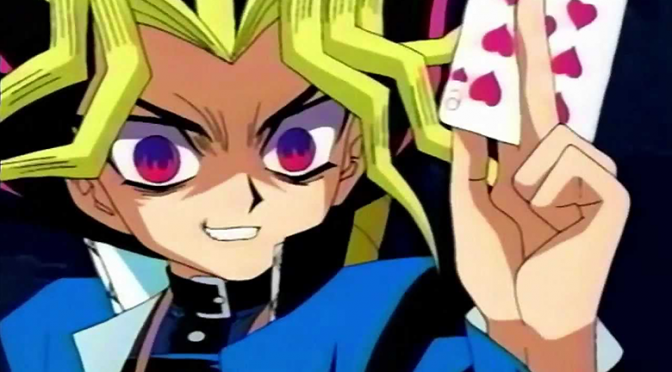 SeasonS0-08 – The Movement of the 4 Game Masters

Kaiba looks out the window and thinks about his encounter with Yuugi. Yuugi asks Kaiba if he knows why Blue Eyes Dragon didn’t attack. Then Yuugi explains Blue Eyes Dragon is in the heart of Grandpa. In the end, Blue Eyes Dragon destroyed itself. These thoughts make Kaiba mad. He swears to make Yuugi lose. Kaiba calls out, “Game Shitennou!” Statues with monsters on them appear. Kaiba says them that their target is Yuugi. The forehead of one of the monsters light up.

The clock strikes three o’clock, and the bell rings. A small gathering is occurring at someone’s house. A man named Sheldan walks out of his house and is delighted that the weather is fine for the party. Sheldan is holding a doll, who’s name is Fiona. He tells Fiona that he should treat everyone to his special biscuit. Fiona, being an inanimate object, does not respond, but Sheldan thinks Fiona is pleased. 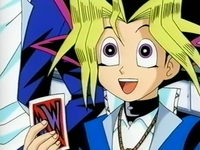 A helicopter flies up to the house and then lands in Sheldan’s backyard. The wind from the helicopters disrupts the party, causing everything to be blown away. Some of the people from the party fall, revealing them to be dolls. Sheldan looks at the helicopter and notices the Kaiba Corp. logo on it. He thinks Kaiba needs something from him.

At school, Yuugi and the gang are playing Duel Monsters. Yuugi, who is playing against Miho, has just won. Jounouchi and Anzu congratulate Yuugi for his win. Miho, however, is disappointed with her loss. Yuugi says it’s his first time playing the game, and Miho says it was her first time too. Honda yells at Yuugi for making Miho cry. Yuugi nearly falls out of his seat. Anzu tells Honda it isn’t Yuugi’s fault. It’s just a game after all. Jounouchi agrees. Honda and Jounouchi begin to argue with each other, but Anzu stops the fight. She says it’s not Yuugi’s fault, so Yuugi doesn’t need to apologize. Miho jumps into Honda’s arms. Honda still believes it’s Yuugi’s fault. Yuugi mutters a sorry, and Anzu scolds him for apologizing. Suddenly, an announcement is made from the PA for Yuugi to report to the infirmary.

Yuugi walks up to the infirmary and opens the doors. A woman, who is sitting at a desk, tells Yuugi to enter. Yuugi walks in and asks what she wants. The woman thinks Yuugi is strong at card games. She’s heard the rumors, but Yuugi doesn’t think he’s that strong. However, the woman wants to see Yuugi’s skill, and Yuugi accepts.

So Yuugi and the woman start a game of Duel Monsters. Yuugi says they will start with 2000 life points and five cards in their hands. The woman says she knows, and they get started. Yuugi goes first. He plays RockGan in the Wasteland field. Yuugi says RockGan is made of rocks, so the Wasteland field boosts his attack by fifty percent. The woman thinks Yuugi’s move was boring. She plays Ghost. Since both monsters have equal attack strength, they destroy each other.

Yuugi’s turn begins, and he draws. Yuugi studies his hand carefully and then plays Dark Dragon. The woman thinks Dark Dragon is a powerful card. She counters by playing a monster in defense. The duel continues for several more turns. Yuugi’s life points continue to decrease rapidly, while the woman’s life points still remain high. The woman has just summoned Aphrodite. Yuugi is surprised by the woman’s move. The woman asks if there’s something wrong. Yuugi says even he can beat it easily. Yuugi plays Black Scorpion. Because Black Scorpion has more attack points, Yuugi thinks he’s won. The woman tells Yuugi he’s lost. Aphrodite is the goddess of beauty and was born from the sea. The woman combined her Aphrodite with the Tsunami card. Black Scorpion was swept away by the sea, so Aphrodite wins.

Yuugi thinks the woman is amazing. Suddenly, the bell rings, which means classes have started. Yuugi is about to leave, but the woman stops him. She claims Yuugi’s Neon Knight card as a prize for her victory. Yuugi insists that card is important to him, but the woman doesn’t listen. She tells Yuugi he’ll be late for class. Yuugi gathers up his cards. The woman says if Yuugi can beat her again in a game, she’ll return the card. Yuugi is relieved by that and runs to class.

Suddenly, the woman begins speaking in a man’s voice. Kaiba appears from his hiding place. The woman asks what this is all about. Suddenly, she begins to fall to the floor. Sheldan appears. Apparently, the woman was only one of his dolls! Sheldan tells Kaiba that Yuugi has no comprehension or game tactics. Kaiba says that’s not Yuugi’s true power. Yuugi apparently has another side to him. Kaiba throws Fiona to Sheldan. Sheldan asks Kaiba what he wants. Kaiba exclaims Yuugi has another side of an unbeatable game master. Sheldan says he did not see that. Kaiba tells Sheldan he will see it someday. When he does, Sheldan will be needed as one of Kaiba’s Game Shitennou.

After school, Yuugi tells Anzu he has something to do. Anzu asks if he’s going to the game center again. Yuugi says no. Anzu thinks Yuugi is putting a lot of money into games. Yuugi insists he’s not going to the game center, and then he leaves. Anzu suspects something strange. While running, Yuugi knows that was close, but he has to try out the new fighting game! At the game center, Yuugi looks for the new fighting game, but he cannot find it. A store employee asks Yuugi if he’s looking for something. Yuugi asks about the new game. The store employee tells Yuugi he’s the first one, and he leads Yuugi to the game.

The store employee opens the door, leading to the outside. Then the store employee pushes Yuugi into a car, and the car takes off. The store employee has Yuugi pinned down. Yuugi asks what he’s doing. Sheldan, who is in the passenger seat of the car, holds up the Neon Knight card asks Yuugi if he wants it back. Sheldan talks in the voice of the woman from before, and Yuugi recognizes it. The store employee says Sheldan is one of the Game Shitennou. The store employee then takes his mask off, revealing him to be Kaiba. Kaiba tells Yuugi he’ll bring him down at the Mansion of Dolls.

They arrive at the mansion. Yuugi, Kaiba and Sheldan sit at a table. Lots of dolls surround them, creeping Yuugi out. Yuugi and Sheldan face each other, ready to play their game. Sheldan asks if something about the mansion displeases him. Yuugi says all those eyes looking at him freaks him out. Kaiba says they all want to see Yuugi watch. He laughs, and the game begins.

Sheldan goes first. He decides to use Yuugi’s Neon Knight first. He plays it in the Mountain field. Yuugi says it’s attack points are too high (1800 attack). Yuugi doesn’t think he can beat Neon Knight. He looks at his hand and then plays Devil Dragon in the Wasteland field. Yuugi plays it in defense mode. Sheldan says Yuugi will regret that. He explains he played Neon Knight in the Mountain field because the lightning will help it. The lightning charges Neon Knight up and destroys Devil Dragon. The attack knocks Yuugi to the ground. Suddenly, the eye symbol on the Millenium Puzzle glows. Sheldan says they are playing in the Mansion of Dolls, so a player loses life points even if their monster is in defense. He wants Yuugi to stand up and fight him.

Yuugi stands up; however, Yami Yuugi has taken over. Yuugi states it’s his turn. Kaiba is glad to see Yami Yuugi there. Yuugi has a sharp grin on his face. He plans to attack Sheldan. Sheldan is shocked at what he’s seeing. It’s like Yuugi is a totally different person from before! Yuugi plays Death Wolf in the Forest field. Then Yuugi plays one more monster: Shadow. Sheldan thinks it’s reckless if Yuugi tries to attack Neon Knight.

Sheldan begins his turn. He summons King Beetle. Sheldan says there’s no ways Death Wolf and Shadowman can beat King Beetle. Yuugi knows Sheldan is wrong, since Sheldan overlooked one thing. Shadowman strikes the ground with his sword, and the field begins to change. Yuugi explains Shadowman’s purpose isn’t in battle. He used his sword to change the field into darkness. Neon Knight and King Beetle are weak against darkness, but Death Wolf gains more power. Death Wolf attacks and destroys Neon Knight. King Beetle attacks with its flame, but it’s no use. Death Wolf dodges the attack and bites on King Beetle’s horn. The fire from King Beetle spurts everywhere, and King Beetle ends up being destroyed. Yuugi claims victory for that round. Sheldan recovers from the attack and asks Fiona if she’s okay. He sees burn marks all over Fiona and gets mad at Yuugi. Yuugi snickers and tells Sheldan to make his move.

Sheldan draws and plays Gargoyle in the Mountain field. Gargoyle uses Tornado attack. Yuugi counters by bringing out Knight Soldier. According to Yuugi, Knight Soldier has the advantage because of its sword. Knight Soldier unleashes its sword at Gargoyle, but the attack doesn’t work. Sheldan laughs. Gargoyle attacks Knight Soldier and destroys it. Yuugi can’t believe it! He wonders what’s going on. Yuugi recalls the time where Death Wolf wasn’t able to bite off King Beetle’s horn in one try. Yuugi is positive that King Soldier should have been able to defeat Gargoyle. Sheldan continues to laugh. He tells Yuugi to make his move. Then Sheldan talks to Fiona.

Suddenly, Yuugi realizes they are playing in the Mansion of Dolls, so all of Sheldan’s monsters are dolls! They must be playing in a Doll field. Kaiba tells Yuugi to hurry up and admit defeat. Yuugi decides to attack. He equips Death Wolf with a Magic card. Then Yuugi orders Death Wolf to howl. Death Wolf howls, disrupting Gargoyle. Sheldan wants to know what’s going on. Yuugi explains his Magic card has turned Death Wolf’s howl into a destructive wave. Sheldan plays Salamander, another fire monster, to burn everything up. Yuugi says it’s no use; a Doll monster cannot win against a destructive wave. Both Gargoyle and Salamander fall into pieces. The game is finally over, and Yuugi wins.

It’s raining outside. With the game over, Sheldan walks outside with Fiona in his arms. He plans to get Fiona fixed up. Kaiba stares out the window and watches Sheldan walk away. He’s angry that Yuugi won again. Kaiba swears to take Yuugi down next time.