Joey is gloating over his victory, when his stomach begins to groan. He and Tristan are so hungry that they sniff out some fish cooking on a camp fire. They devour them, and a guy who has been swimming near by jumps onto the scene and accuses them of stealing his meal. He introduces himself as Mako, the sea duelist. He lures them into a false sense of security by telling them of how when he was little, his father disappeared on a ship during a storm at sea. He noticed that the lifeboat was gone too, so he thinks his father is still alive. He challenges Yugi to a duel.

Yugi accepts, and Mako shows him the arena which is 1/2 land and 1/2 water. Yugi and Mako wager 2 starchips and it begins. Mako summons a giant yellow squid, Fiend Kraken, but it’s under deep water and Yugi can’t see it. Yugi plays Horn Imp in attack mode, but Fiend Kraken destroys it. Then Yugi uses Feral Imp with Horm Of Unicorn, believing that the electricity will beat it. Mako uses his Jellyfish card to absorb the electricity, and Feral Imp is destroyed by Fiend Kraken too.

Nent, Yugi unwisely plays Silver Fang powering it up with Full Moon. This is a mistake. The moon controls the tides, so the high tide is used to his advantage when Mako summons Kairu-Shin. Silver Fang is gone along with all the land except a teensy bit. Yugi plays Giant Rock Soldier in defense mode, but it hardly fits on the little piece. Mako summons Great White to lead the other monsters, who will kill Yugi’s monster next turn. Yugi has a brilliant plan. He uses his Rock Soldier and destroys the moon. This makes the tide recede and the entire field is land. Yugi sends out Curse Of Dragon, who destroys all of Mako’s sea creatures. Mako gives up his starchips to Yugi, and Yugi wishes Mako good luck on finding his father. 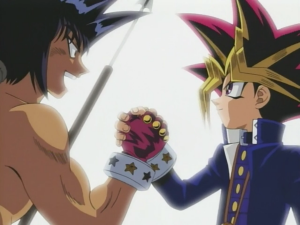