Kaiba guesses the wrong hat twice, and Yugi’s Dark Magician defeats the BlueEyes White Dragon. But, “Kaiba” sends out another BlueEyse White Dragon. All looks bad, until Kaiba, who is still sneaking around, realizes that Yugi is dueling an impostor of him. Kaiba uploads a virus into “Kaiba’s” BlueEyes White Dragon, which makes its attack power lower, but Pegasus realizes that Kaiab is hacking into the system, and (while getting mad after realizing Kaiba isn’t dead), stops the virus through his computer. Kaiba gets really mad, and his anger destroys the Blueeyes White Dragon somehow. “Kaiba” reveals himself as Kaiba’s evil side, who was rejected by Kaiba after Yugi defeated him. He stalls Yugi for a while, and Yugi manages to get three monsters out, including a Mystic Elf, who he strengthens with a magic card for extra attack and defense points.

But the evil side draws the final BlueEyes White Dragon, which will kill Yugi no matter how many monsters he has out. But Yugi plays a trap card which reflects the dragon’s attack. But the evil side dissolves the attack with a magic card. Yugi plays another magic card, which allows him to control a BlueEyes White Dragon. His Dragon is tougher then the evil side’s, because his elf transferred its power to the dragon. The evil side is defeated, and vanishes. All seems good, but Kaiba is still on the run, and the guard has taken Mokuba away once again. And Pegasus begins to laugh in his office. He has something else up his sleeve… 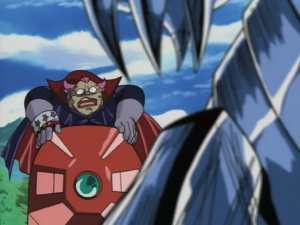