Pegasus is in a meeting with his council of unknown people who want Pegasus to overtake Kaiba’s company. They ask Pegasus what happened earlier that day with Mokuba, and Pegasus says everything’s under control. It is also revealed now that only Pegasus can see these people through the millennium eye, so they must not really be in the room with him. Meanwhile, Kaiba is flying to the duelist kingdom with a helicopter, and he explains to us that he wants to save his brother. He lands right where Yugi, Joey, Tristan, Baccura, and Taya are sleeping. Actually, Yugi and Baccura are talking about Baccura’s millennium ring, and they realize that it points to other millennium items.

Kaiba tries to evade Yugi, but Joey insults him, and challenges him to a duel. Kaiba agrees, but only if they use his company’s new holographic technology. Joey agrees as well. This new system is a small device that you download your cards into, then place on your hand. While playing, it spawns a very realistic duel monster or whatever card, making in very real looking, especially since its not surrounded by an arena. But, Joey does terrible against Kaiba, and loses quickly, and due to the realism of the fight, his courage is lost. Yugi and company get mad at Kaiba for staining Joey’s confidence just when he started believing in himself, but Kaiba heads toward the castle, ready to try and defeat Pegasus in a match.

Kaiba flashes back to when he watched Pegasus duel a person, and he predicted every move he made with the millennium eye. It was the same way when Yugi battled him over the video tape before they came to the Duelist Kingdom. Yugi and company go back to sleep, ready for a fresh new morning for dueling. 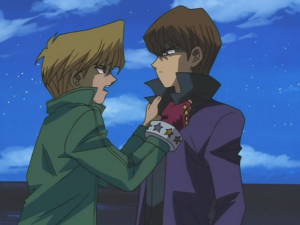