After solving the Paradox Brothers’ puzzle, Yugi and Joey are on their way to Pegasus’s castle for their final duels, but little do they know that their journey is far from over yet. Mokuba’s soul has been trapped by Pegasus in a card, and the only way for Kaiba to free him is to challenge Yugi in a rematch. With the five star chips Kaiba has been given, his duel with Yugi will ether gain him access to a duel with Pegasus or eliminate him.

Meanwhile, Free from the labyrinth, Bakura’s millennium ring is pointing towards the castle, being drawn to Pegasus’s millennium eye. This doesn’t bother Yugi, because they are heading there already. Taya has a flashback of how Yugi seems to be two different people, like the time when he was forced to duel Bakura in the Shadow Realm (“Evil Spirit of the Ring”). She them recalls how Yugi and Joey once helped her to find a warehouse to use as a dance studio. (New ‘flashback’)

As the gang arrives at the castle, Kaiba is waiting at the doorway. He tells Yugi that he won’t let him pass unless the two of them face off in battle again. Yugi wants to refuse, but Kaiba accuses him of being too scared to fight him without having Exodia. Joey agrees to fight, but Taya convinces him not to as he will only lose again. Yugi remembers his first battle with Kaiba (“The Heart of the Cards”) and how he now seems different, like he has a purpose for dueling. He doesn’t know about Mokuba and Kaiba is not willing to tell him. Yugi agrees to the duel because he is unable to refuse the heart of the cards.

On the rooftop of the castle, the two enemies prepare for a duel using Kaiba’s dueling disc system (from “The Scars of Defeat”) as Bandit Keith arrives at the castle for his duel with Pegasus. The guard tells him that there is a match about to start and so he heads to the roof to watch the commencing duel. As the match starts, Kaiba leads Yugi into destroying his first monster in order to use its fallen life points to power up his next. But Yugi plays the Dark Magician and easily crushes the Sword Stalker. Kaiba then plays a genie monster, Lajin, and uses a magic card to defend it in a lamp. When Yugi attacks, the Dark Magician’s attack is deflected, destroying his Curse of Dragon.

With both duelists on 1500 life points, it seems like the match could be close. But Yugi does not know that Kaiba has one Blue Eyes White Dragon waiting in the wings, or that he is planning to do something no duelist has ever done before, polymerise all three Blue Eyes to form the Blue Eyes Ultimate Dragon.
TO BE CONTINUED… 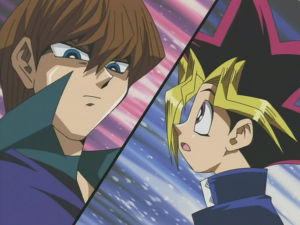 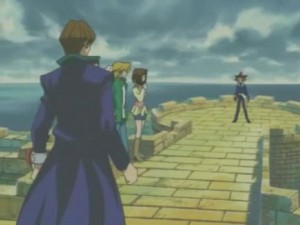