As the face off on the rooftop rages, both Yugi and Kaiba have 1500 life points remaining. But Yugi is beginning to worry because Kaiba seems different. He is not toying with Yugi as he did in their first match, but is getting down to business. As Kaiba makes his next move, he plays the ‘Despell’ card, destroying Yugi’s ‘Swords of Revealing Light’, the card which shut down his Blue Eyes White Dragons the last time they dueled. But Yugi retaliates with a card which reveals Kaiba’s hand, showing the Blue Eyes that he is holding. Yugi is concerned because Kaiba would have played this immediately last time they fought. He doesn’t realize Kaiba intends to draw all three Blue Eyes and merge them.

Using the ‘Mystic Box’ Yugi finally manages to destroy Lajin and the Magical Lamp, taking Kaiba’s life points down to 800. But Kaiba plays his Dark Clown, trapped with the virus card Crush. As Yugi destroys the clown, the virus infects his monsters on the field, destroying them. Not only that, but it infects all monsters in his deck with an attack power of 1500 or more. If Yugi tries to play one, it will be destroyed immediately.

As Yugi plays his next monster in defense, Kaiba draws the card he needed, ‘Polymerisation’. Merging all three Blue Eyes, he forms the strongest monster in the game, the Blue Eyes Ultimate Dragon. With his stone soldier destroyed, Yugi prepares for his next turn. But will he be able to pull himself back from the brink of defeat?
TO BE CONTINUED… 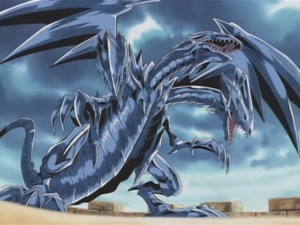