After losing his duel with Kaiba, Yugi no longer has enough star chips to duel Pegasus in an attempt to save his Grandpa. Not only that, but the battle he had to wage with his other self has left him scared to duel ever again in case he can’t control the presence inside him. His friends try to offer support, but Yugi is too lost in his own fears to hear them. Joey offers Yugi his chips, but Yugi is too stunned to answer. Just then Mai arrives, ready to duel Pegasus. Seeing Yugi, she teases him, asking why he hasn’t yet entered the castle even though he has enough chips. Yugi’s friends tell her about his duel with Kaiba and she tries to give him a pep talk, explaining that he shouldn’t give up just because he’s lost one duel. She offers him the star chips that she owes him (from his duel with Panik) but once again he refuses, too scared to ever duel. Mai challenges Yugi to duel her for the chips, but he is too afraid to duel her, or anyone, so Taya (Téa) accepts instead. A duel begins between the two girls for Yugi’s chance to enter the castle again.

Taya plays the weak Petite Angel, but it is quickly crushed by Mai’s Harpy Lady. On her next turn, Taya plays Fairies’ Gift in attack mode, and a trap card, Wobaku, face down. Taya attacks Mai, but forgets that Mai had played a magic card on her previous turn, the Rose Whip. With the extra power of the Rose Whip, the Harpy Lady destroys Taya’s monster and knocks her life points down to 1100. Mai then plays another magic card face down, the Harpy’s Feather Duster. Tea draws her next card, Shining Friendship. She hopes that this card will be as strong as the friendship of her group of friends. She plays the card and Mai attacks, but Taya’s trap card activates, reducing the Harpy’s attack points to 0. Mai has been mocking Taya, claiming that she is too scared to win. Taya admits this, but tells Mai that no matter how afraid she is, she will never give up because she has her friends to help her out. Her emotional speech finally begins to get through to Yugi who begins to realize what is happening around him.

Taya tells Mai that she has to fight on, for Yugi, and that she will duel even though she is scared. On her next turn, Taya plays the Magician of Faith in defense and then plays the Silver Bow and Arrow on Shining Friendship. But Mai counters with the Cyber Shield before using Despell to remove the Silver Bow. She attacks the Magician of Faith, meaning Taya gets to draw a card from her graveyard, the Silver Bow. Taya replays the Bow, along with the Elf’s Light, but Mai is still confident that her monster is stronger and attacks before Taya is finished. Then, playing her own Despell card, Taya dispells the Cyber Shield, meaning that Mai’s Harpy Lady is weaker than Taya’s Shining Friendship. Taya attacks, reducing Mai’s life points to 1600. At this point, Mai surrenders, claiming that Taya has destroyed her only strong monster. But both she and Yugi know that she could have easily won the match if she had played her Harpy’s Feather Duster. Yugi tries to ask Mai about it, but she changes the subject, asking why he isn’t racing to get back into the castle. Together, the friends with Mai head back towards the castle in order to duel Pegasus. But they’ll have to wait for Kaiba to have his match first.. 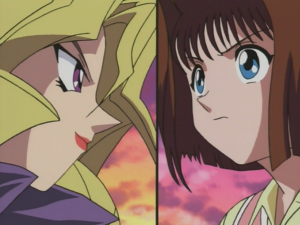