As night falls on the Duelist Island, after learning who will they will be dueling the next day, everyone begins preparing for the coming day in different ways. While Mai tries to strengthen up her deck for her duel against Yugi, Joey drifts into a deep sleep, dreaming about donuts. Tea, Bakura, and Triston are searching around the dueling platforms, determined to find out how Pegasus defeated Kaiba so easily earlier that day. After finding a hole in the wall that pointed to the spot where Kaiba’s cards had been, they head off to the tower, which lined up with the hole.

Meanwhile, Yugi has found the three cards with his grandfather, Kaiba, and Mokuba’s souls trapped inside. They warn him that he must unlock the secret of his millennium puzzle and defeat Pegasus. Tea, Bakura, and Triston are caught by Pegaus, and sent to the shadow realm. But just before they are trapped forever, Bakura’s dark Yami side returns, and erases everyone’s minds and sends them back to the real world. Bandit Keith steals Joey’s qualifying card and Yugi wakes up, realizing that it had all been a dream. But he knows that his grandfather was trying to tell him something in the dream, but he is unsure as to what the secret of the puzzle is, and he’s running out of time. 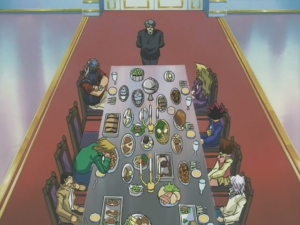