The duelist Kingdom playoffs begin, starting with the duel between Yugi and Mai. As Yugi’s friends watch him from balcony, Yugi and Mai begin to duel, but Yugi is not willing to accept the help of the spirit of the puzzle anymore, afraid of what it might do to Mai. With Yugi only half concentrating on the duel, and also trying to keep the spirit under control, Mai immediately takes the lead with the help of her Mirror Wall, a permanent trap that halves the attack points of any creature that attacks.

Yugi makes mistake after mistake while Mai powers up her Harpie. Yugi’s friends begin wonder what is wrong with Yugi and why he is playing so poorly. After playing the Shadow of Eyes card, and forcing Yugi’s Dark Magician to attack, Yugi’s life points are reduced to 300, and Mai’s are still at 2000. The spirit of the puzzle warns Yugi that if he doesn’t let him help, everyone will lose!

Can Yugi get over his fear and make a come-from-behind victory, or will he be eliminated and lose his chance to save his grandfather and the Kaiba brothers? 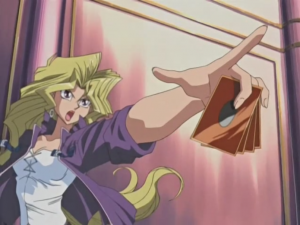