As the first playoff duel rages, Yugi has been reduced to 300 life points while Mai’s life points remain at an untouched 2000. With the Shadow of Eyes card luring Yugi’s monsters into attack mode and the Mirror Wall then reducing their attack points, Yugi seems helpless against the power of Mai’s Harpy / Dragon team. Not only that, but he is struggling to resist the spirit of his Millennium Puzzle, fearing what it might do. But if he doesn’t embrace the spirit, he may risk losing the only chance he has of rescuing his Grandpa.
Mai’s new strategy seems flawless and she owes it to Joey for teaching her the most important lesson of her life. When he defeated her in his first ever tournament duel, he forced her to look at herself in a new way, confronting her fears of her abilities and her trust in herself. Mai tells Joey that her defeat against him taught her more about dueling than any of her victories and forced her to face up to her fears. But now Yugi has the chance to do the same and he is bottling up his fears, scared of what might happen.

As Yugi considers what Mai has said, the spirit of the Puzzle explains that he never meant to hurt Kaiba, but was just trying to save Yugi’s Grandpa. He promises to work together with Yugi, not doing what he alone sees best again. Yugi agrees and the two begin working together once more. Playing Brain Control, Yugi takes control of Mai’s Pet Dragon, but even under his control it still refuses to attack its master. Instead, Yugi plays one card face own and then plays the Catapult Turtle. Loading the Dragon onto the Turtle’s back, Yugi fires it at Mai’s Harpy Lady, destroying her Mirror Wall and reducing her life points to 850 in one attack. With Yugi’s inner spirit working with him once more, Mai will have to play better than ever in order to win. Fearing Yugi’s trap card, she plays the Elegant Egotist, triplicating her Harpy Lady to give a trio of the powerful monsters and then ends her turn. As Yugi’s turn begins, he tells Mai that she should have attacked him on her turn. She argues that she isn’t that foolish, but as Yugi turns over the card Mai realizes that he was bluffing. Revealing the Monster Recovery card, Yugi tells Mai that an attack on her turn would have won her the match. Instead, he plays the Monster Recovery card to return all his monsters to his deck and then draw a new hand.

But even with his new hand, he still has nothing strong enough to defeat the Mai’s three Harpies. Instead he plays the one card that he can, the Mystical Elf, in defence mode. As a female monster, it is unaffected by the Shadow of Eyes and so cannot be lured into attacking. Mai is shocked, having forgotten the flaw in the Shadow of Eyes, but is unfazed as she plays Monster Reborn to revive her Harpy’s Pet Dragon, now even stronger at 2900 attack points because of the three Harpies. Attacking the Mystical Elf with her three Harpies, Mai destroys Yugi’s only possible defense card.

With only one card left to save the duel, Yugi begins to lose faith in himself. But the strength of Yugi and his spirit, combined with the heart of the cards, prevails as Yugi draws the Swords of Revealing Light, shutting down Mai’s monsters for three turns. Yugi’s spirit tells him that there is only one way they can win, and that is through the Black Lustre Ritual. But the Ritual is risky and three turns may not be long enough to draw all the necessary cards. Even so, Yugi plays the first component of the ritual, the puny Karebo. Mai is amazed by Yugi’s guts at playing such a weak monster, but he warns her not to mock the creature as it is the start of her demise. Mai draws one card and then ends her turn, but as Yugi draws his next card he is still missing the final component needed for the Black Lustre Ritual. However he is able to play the second part and using his own Monster Reborn card revives Gaia, the Fierce Knight. But with only two turns to go, can he draw the final card to activate the Ritual.

As Mai’s turn begins, Pegasus realizes Yugi’s strategy and is astounded by his foolishness. As Mai draws a second Harpy Lady card, she gloats to herself that Yugi will be crushed on her next turn when she attacks with four Harpies and the Harpy’s pet Dragon at a powered-up 3200 attack points. As she ends her turn, the Swords fade away, releasing their control over Mai’s monsters.

As he prepares to draw the deciding card of the duel, Yugi begins to doubt whether it is fair to risk the lives of so many of Yugi’s friends on the draw of one card. But with the support of all his friends, the power of the two Yugi’s is stronger than ever, shocking Pegasus who has never felt such power. As he draws the final card, Yugi reveals the Black Lustre Ritual card. Activating the card, the ritual beings. As both of his monsters are sacrificed, their powers of light and darkness are combined, opening the Gates of Chaos in order to allow the Black Lustre Soldier to emerge. With a powerful attack, the Soldier destroys the Pet Dragon and reduces Mai’s life points to 750. Everyone is shocked, especially Mai whose spirit is broken by the crushing defeat of her Dragon. Unable to revive it again, her strategy has fallen to pieces and she cannot see any way to win. Laying her hand over her deck, she concedes the match to Yugi, unable to face seeing her Harpies destroyed on Yugi’s next turn.

As Mai turns to leave, Yugi thanks her for teaching him to confront his fears and weaknesses. Mai admits that she also has a lot to learn, both about dueling and herself, but warns Yugi that they will meet again and next time she may not be so easy to defeat. Even so, Yugi must still defeat the winner of the next duel in order to earn the right to duel Pegasus and save his Grandpa. But will he be strong enough to defeat his opponent if he is pitted against his closest friend? 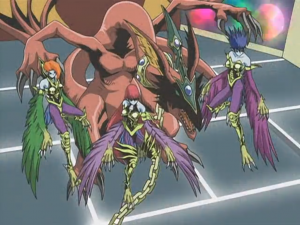 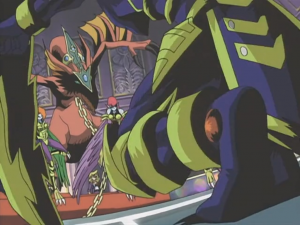