With Joey in the lead, Keith gets really angry and sends out the mighty Barrel Dragon who annihilates Joey’s Axe Raider and Gerusies. Joey tries his Time Wizard and Baby Dragon combo, and it worked! But Keith used his trap card Time Machine to bring back the Barrel Dragon at full power. Joey plays Red Eyes Black Dragon and uses his Copycat card to get the Magic Metal Force and activate it, creating the Red Eyes Metal Black Dragon! He destroys the Barrel Dragon, but Keith plays his Slot Machine in defense and uses the Seven Completed to power up it’s defense to 3000. Then he slips another out from his wrist band and plays it to raise the Slot Machine’s attack. But as it attacks Joey plays his Dragon Nails, powering up his Dragon to 3400. But Keith cheats yet again and uses his last Seven Completed to raise the Slot Machine’s attack to 3400.

Keith then steals Joey’s Shield and Sword using his Pilager card. He activates it, making his Slot Machine’s attack 3000 and the Red Eyes Metal Black Dragon’s 2400. But as the dragon dies, Joey uses his Grave Robber to get the Time Machine and revive his dragon with an attack of 3400. It destroys Keith’s monster and his Life Points. Keith accuses Joey of cheating, but Pegasus claims to have known that Keith stole Joey’s entry card and cheated with his Seven Completed cards. Keith is dragged away, but breaks free and threatens Pegasus. Pegasus activates a trap door and Keith is tossed out of the castle into the sea below. Now Joey and Yugi must duel to see who battles Pegasus. 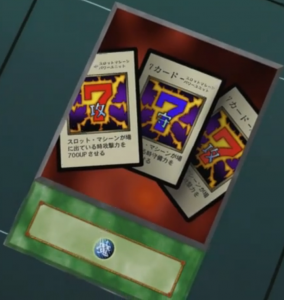 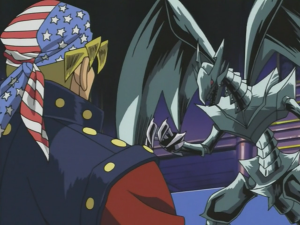