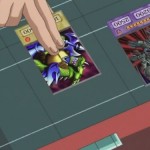 As the duel between friends continues, Joey seems unstoppable with the Black Skull Dragon, but Yugi isn’t about to go down. He plays the Dark Magician with Magical Hats. Joey then attacks an empty hat. Then Joey plays Gerusies in an attempt to lure Yugi into attacking but Yugi doesn’t. Then Yugi plays a card hidden in another hat. Joey attacks and once again hits an empty hat. On his third try, Joey hits the hat with the Spell-Binding Circle and His Dragon’s attack is lowered to 2500 while he switched Gerusies to defence. Then Yugi played the Book of Secret Arts to power up the Dark Magician to 2800, thus destroying Joey’s dragon. But then Joey played Baby Dragon and another card face down.

Yugi thought it was the Time Wizard, so he attacked. But it was Kunai with Chain and the Dark Magician was captured by Gerusies. Then, using the heart of the cards, Joey drew and played Time Wizard. The Time Roulette succeeded and a Thousand Dragon and Dark Sage were created. But the Thousand Dragon’s attack was blocked by the magic effect of the Dark Sage, allowing Yugi to play any card in his deck during either player’s turn! After using Mokiou Mist to shut-down Joey’s attack, Yugi used Reborn the Monster to bring back the Black Skull Dragon, thus ending the duel. After, Yugi gave the three million dollars to Joey for his sister.
Now it’s time for Yugi to duel with Pegasus..