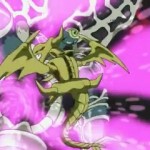 Pegasus is enraged that Yugi has mastered his Millennium Puzzle and developed the Mind Shuffle. Pegasus takes them both to the Shadow Realm and so begins a true Shadow Game. Pegasus plays Dark Eyes Illusionist, a card with no attack or defense points! Pegasus created the monster just for the tournament, so Yugi doesn’t know its effect. Yugi decides to attack with Curse of Dragon. Unfortunately, the Dark Eyes’ effect paralyzes all monsters that attack! Then Pegasus plays the Black Illusion Ritual Call that sacrifices the Dark Eyes Illusionist to summon another specially-created creature: the mighty Relinquished! The monster consumes the Curse of Dragon.

When Yugi attacks with his Dark Magician, the Curse of Dragon appears as a shield to protect Relinquished. The Dragon is destroyed, and Yugi loses Life Points! As the Relinquished assimilates the Dark Magician, Yugi changes back to normal to draw one card and play it face down. Then the power of the Shadow Realm takes its toll and little Yugi collapses. Now the Spirit of the Puzzle must fight alone to avenge Yugi but Pegasus plays a self-destructing Bagadan that will destroy every creature on the field…but wipe out Yugi’s life points in two turns.

Meanwhile, Tristan discovers that the Millennium Ring took control of Bakura again and it wants Mokuba as it’s new host! Tristan attacks and knocks the possessed Bakura out. Then he throws the Millennium Ring as far from the castle as he could. He then took both Mokuba and Bakura back to the arena and reunites with his friends, but they are unable to enter the Shadow Realm and help Yugi.
Continues..