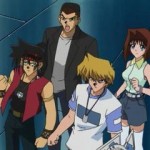 Pegasus has freed Grampa, Mokuba, and Kaiba’s souls, Joey has his prize money, and Kaiba and Mokuba are back together. Yugi talks to the spirit of the puzzle and they congratulate each other. They all hitch a ride home from Kaiba, and Bakura in his evil state thinks that he has the best prize of all: Pegasus’s Millennium Eye. We don’t see him again…

Back at home, Grandpa is fully recovered. They run into Rebecca, a girl who is only eight but claims to be a world champion and prodigy at Duel Monsters. Joey and Tristan are very skeptic since she has a Teddy bear with her, and she pretends he can talk. Yugi says he read about a Duel Monsters child prodigy once, so it’s possible she’s that person. She says that Grandpa stole her Blue Eyes White Dragon, and she wants to duel to get it back. Tea remembers that Kaiba ripped it up in the first episode. Yugi claims that his Grandpa is most certainly not a thief, but she wants to duel anyways. After pulling a few strings with Mokuba, the gang borrows a hologram projector for the duel in Kaiba’s amusement park, Kaiba Land. Yugi says that his Grandpa is in no state to duel after just getting out of the hospital, so he duels Rebecca instead.

Rebecca’s first card is Witch of the Black Forest. Yugi uses Celtic Guardian and destroys it. Rebecca is distraught. Then she pretends that her Teddy bear is telling her something. She says that the bear told her that now she could take a card with 1500 or less defense points from her deck since her witch went to the graveyard. She chooses a card. Then she sends out Sangan, and Celtic Guardian destroys it. She acts upset again, but then her Teddy “tells” her that she can take a monster from her deck with 1500 or less attack points. She chooses her card and plays a monster face down. Suddenly, she drops her “little girl” act and has an attitude of a pro. She uses a card that allows her to discard a monster from her hand, and get rid of Yugi’s Celtic Guardian. She does this. Meanwhile Grandpa is beginning to remember a duel he had almost exactly like this one. He warns Yugi to be careful.

Yugi has Summoned Skull attack the face down card on the field. It’s the Millennium Shield and Yugi loses 500 life points. She then plays the Ring of Magnetism on the shield, bringing its attack down to 2500 and then plays Cannon Soldier (400/1300). Yugi is worried because Cannon Soldier can attack his life points directly if she sacrifices another monster. Yugi orders Summoned Skull to destroy Cannon Soldier, but the Millennium Shield takes the attack because of the Ring of Magnetism. Then Rebecca plays another Witch of the Black Forest and sacrifices it, causing her to draw another card from her deck. It also lets Cannon Soldier attack Yugi’s life points directly. Grandpa now remembers that he played the exact same duel with a friend, Arthur Hawkins. Rebecca says that she is Arthur’s Granddaughter. The score is currently: Rebecca 1300 Yugi 1000. Rebecca says that it’s hopeless for Yugi…
(the episode ends as a cliff hanger.)