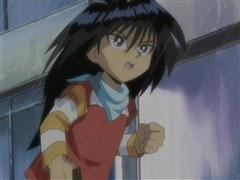 Kaiba returns to Kaiba Corp. to get revenge on the traitors that went against him but they claim they allied with Pegasus only to get Kaiba back. That stalls Kaiba long enough for them to trap him inside a virtual reality game based on Duel Monsters that he has spent years perfecting. With Kaiba defenseless against his own program, Mokuba goes to get Yugi and Joey to venture into the game in order to rescue Kaiba.

The heroes defeat the first challenge by reversing the defense and attack of a horde of zombie monsters, then end up in a virtual town they can’t escape until they get a Makuri Bird card to get through the desert storms. Joey enters into a contest as ‘Senor Porky’ to win the prize.

Meanwhile the traitorous Kaiba board members send their minions to the Kaiba office they’re using to enter the virtual world.

The Virtual World story arc (episodes 98-121) can be seen as a sequel to this arc, as it features another virtual reality system and the return of The Big Five.