As ‘Senor Porky’ Joey fights in a contest against a masked woman who turns out to be Mai, who is being paid to test the system. They get the Neatori Bird card and it leads them through the desert storm to a castle. They end up in a labyrinth dodging labyrinth tanks but Yugi uses his Magic Hats card to escape. Then a fairy takes them to meet Princess Adina, a character that Kaiba modeled on his younger brother.

Adina leads then out of the Maze to confront a Gate Guardian, but the guys form the Black Skull Dragon with the Dragon Nails to destroy it. Adina informs them that Kaiba is being held prisoner in the Castle of Dark Illusions by the Witty Phantom until he can be sacrificed to the Mythic Dragon. But when Mokuba is also kidnapped, heroes Yugi, Joey and Mai must infiltrate the Castle to rescue the two Kaiba brothers once again. 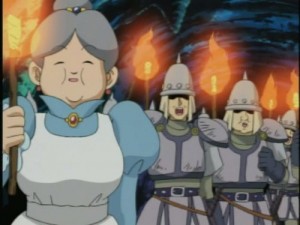 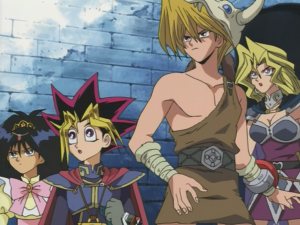