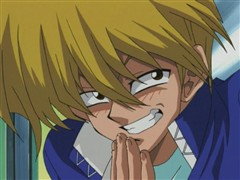 A new game shop opens up across the street from Grandpa’s shop and Grandpa is upset, thinking that he won’t be able to compete with the new game shop. Yugi and the gang are at school when they notice that the new student Duke Devlin is showing of to the girls in class. Duke turns out to be the owner of the new game shop. Joey thinks that Duke can’t be as good as he thinks he is, so Duke challenges Joey to a game using dice. Duke tricks Joey and wins. Joey gets mad and challenges Duke to a game of Duel Monsters. Duke says that he doesn’t have a deck, so they will each make a deck using new packages of cards.

Yugi, Joey, Tea and Tristen arrive at Duke’s game shop and they get on an elevator to the basement. Duke and Joey each take packages of Duel Monster cards from a box to make their decks and Joey claims that he got some good cards. They get to the basement and Duke and Joey begin their duel while three cheer leaders cheer for Duke. Duke starts by summoning Oni-Tank T-34 (1400/1700) in attack mode. Joey summons Sword Hunter (2450/1700) in attack mode and it destroys Oni-Tank (Duke’s LP: 950). Joey then explains that Sword Hunter turns the monsters that it destroys into parts of its armor, increase its attack by 200 (2650/1700). Duke places a card face down and summons Dark Bat (1000/1000) in defense mode. Joey summons the Mad Sword Beast (1400/1200) which destroys Dark Bat. Because of Mad Sword Beast’s effect, it deals Life Point damage even when it attacks monsters in defense mode (Duke’s LP: 550).

Duke then activates Michizure, which destroys one monster on the field when one monster goes to the graveyard, so Duke destroys Sword Hunter. Duke then summons Spike Bot (1800/1700) which destroys the Mad Sword Beast (Joey’s LP: 1600). Joey summons Goblin Attack Force (2300/0) which destroys Spike Bot, reducing Duke’s Life Points to 50. Because of the Goblin Attack Force’s effect, they are switched to defense mode after they attack. Duke then summons Gradius (1200/800) and then plays Limiter Removal to double the attack of all machine monsters, so Gradius’ attack power doubles (2400/800).

Yugi questions this move, as all monsters that are affected by Limiter Removal are destroyed at the end of the turn and Joey’s Goblins are in defense mode. Duke then equips the Fairy Meteor Crush card onto Gradius, giving Gradius the ability to deal Life Point damage when it attacks monsters in defense mode. Gradius attacks the Goblins, which have 0 defense, reducing Joey’s Life Points to 0. Because of their bet, Joey has to wear a dog suit for a week. Yugi becomes Yami Yugi and challenges Duke to a game to help Joey.
But Duke has two conditions: