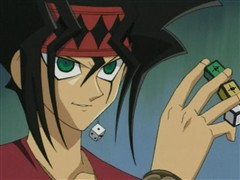 Yugi challenges Duke to a game to win Joey’s freedom, and if he loses he will never duel again.The media hears that Yugi, The King Of Games, is going to battle Duke Delvin, the champion of Dungeon Dice Monsters, and is going to do it by playing Dungeon Dice Monsters, a game that Yugi has never played. Duke explains as little as possible to Yugi about the game but enough to get him started. They start to play and just as Yugi thinks he’s figured it out Duke tells him another rule that totally changes the game.

Eventually Yugi manages to get a monster on the field and things look up, but then Duke manages to Destroy one of Yugi’s three heart points, then Duke tells Yugi about how he had worked his whole life on creating Dungeon Dice Monsters and he had finally gotten his idea to Pegasus and they agreed that right after the Duelist Kingdom Tournament Pegasus would make a partnership with Duke and help market Dungeon Dice Monsters, but then Yugi came and beat Pegasus and Duke hadn’t been able to get a hold of Pegasus since. Duke believes that Yugi cheated when he beat Pegasus because nobody can beat someone at a game they created, so he wants to defeat Yugi to prove that he was cheating, and as Yugi is down by every way possible not even he is sure if it is possible to beat him.