As the Dungeon Dice game between Yugi and Duke continues, Yugi begins to work out the rules of the game, and how to use them to his advantage. And as Yugi wipes out two of Duke’s three heart points, it seems that the King of Games is going to keep his crown after all… 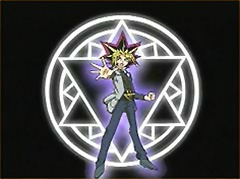 Yami Yugi is in bad shape, having already lost one of his three Heart Points. If Duke’s monsters aren’t stopped, he’ll be able to close in and attack the last two hearts, winning the game next turn. That means that he’ll have to surrender his title of “King of Games” to Duke, never duel again, and abandon Joey to a week of servitude and humiliation at Duke’s feet. Yami turns to the Help Screen provided to him, and he locates the information about his most recent monster, “Thunder Ball”. He sees that it has a powerful effect, but he’ll need a good roll to make it work. With all his will, he rolls his next three dice, and he sees that not only do two of the dice bear Magic Crests, but they also each have “x2” multipliers, so Yami gains 4 Magic Crests. With these, he casts “Thunder Ball’s” ability twice, each time allowing “Thunder Ball” to propel itself in a straight line until it collides with one one Duke’s monsters, destroying the target. With two resounding crashes, Yami destroys the two most imminent threats to his Heart Points.

Duke grudgingly continues the game. He makes no progress on his next turn, but he knows he has to win. He explains to the others that he worked hard to design Dungeon Dice Monsters to be a great game. He sent a description of the game to Maximillion Pegasus, hoping that Industrial Illusions could help sell his game. He was thrilled when he got the response that Pegasus wanted to try out the game himself. Duke flew out to Pegasus’ Duelist Kingdom island just before the tournament began, and he was shocked when Pegasus proceeded to defeat him in their test run, summoning monsters and defeating Duke with ease. But the defeat was worth it because Pegasus enjoyed the game so much, he agreed to have Industrial Illusions produce Dungeon Dice Monsters. With assurances that the contract could be settled after the tournament was over, Duke returned to the mainland satisfied. But his dream is now shattered, because after that tournament, Pegasus has dropped off the face of the earth — no answers, no contract, nothing. In the English version, Duke accuses Yami of cheating, saying that nobody could beat Pegasus in a fair fight, given Pegasus’ obvious skill, and Duke’s victory will expose Yami’s cheating ways. In the Japanese version, Otogi holds Yami responsible for devastating Pegasus and ruining his dream. Either way, Duke is bent on using whatever power it takes to defeat Yami here and now.

Yami isn’t giving up, though, and on his next turn, he manages to gather the dice for a low-level summon. It works, but Duke taunts his new monster, which has been placed so far to the side of the playing field that it’s no threat to Duke at all. But on his next turn, Duke brings the fight to Yami by summoning a monster in the same portion of the field, using enough Progress Crests to target Yami’s monster in battle. A power-up effect on Duke’s monster guarantees a win for Duke, and Yami quickly turns to the Help Screen. Moments before the attack connects, Yami orders his Knight to switch into Defense Mode. When any monster is targeted in battle, one has the option of spending a Defense Crest from the Crest Pool. If so, the damage to the target’s Hit Points is reduced by the value of the target’s Defense Points. This still results in a loss of HP for Yami’s monster, but it survives, and Duke seethes seeing Yami analyzing his game so quickly. On Yami’s next turn, he activates his Knight’s ability for a double attack that the “Battle Ox” cannot withstand. The target is destroyed, winning another round for Yami.

But Duke only laughs, because his last move did more than summon a new monster. He points out the red squares made by his summoned dice unfolding. The chain of end-to-end squares reached all the way from Duke’s end of the field to Yami’s end, and including the squares from Battle Ox’s die, the path reaches from field’s left side to the right. The trick is that Yami’s blue squares can only be built out from existing blue squares, and they cannot cross Duke’s path. Yami is now trapped with only two small portions of the field in which to summon monsters, while Duke has plenty of space. If all of Yami’s monsters get destroyed and he has no more space to summon new ones, it will literally be impossible for him to block Duke’s attacks on his Heart Points.

The threat gets worse when Duke starts his next turn, and holds out one of the dice — a black one. This is a rare die with a special capability, and Duke’s roll wins a summon with this die. He summons it on a square near his end and his monsters, and it reveals not another monster, but a swirling vortex. Duke explains that a black die can summon a “Warp Vortex”, and when two of these are in play, a monster that enters one vortex will teleport to the other one. Furthermore, Duke’s pathway reaches so far into Yami’s side of the field that one more Warp Vortex in that spot will let Duke move his monsters to charge at Yami’s Heart Points with very little effort. Yami tries to prepare for it, and he uses some of his precious remaining space to summon the upper-level monster, “Strike Ninja”. Then it’s Duke’s turn again, and he gloats to see that he’s got the second black die already. With a vengeance, he rolls… but he doesn’t get the summon.

Then it’s Yami’s turn again, and with a shock, he gets an idea. Smiling, he shows Duke his newest opportunity — a black die of his own. He rolls, and the summon works. Yami summons a “Warp Vortex” and sends his “Strike Ninja” to it immediately. This monster has the power to move three times as quickly as a regular one, and with the power of the “Vortex”, it reappears deep in the heart of Duke’s territory. One attack from the ninja wipes out the low-level monster nearest Duke’s podium, and Yami ends his turn. Duke is exposed, but his next roll doesn’t let him do anything. Yami rolls again, and he gets enough Progress Crests for Strike Ninja to charge the rest of the way and attack. With a burst, one of Duke’s Heart Points is gone.

Duke is now more angry than ever, and he rolls, seeing with a rush that he’s gotten a strong summon. He uses it right next to “Strike Ninja”, summoning “Orgoth the Relentless”, which he claims is his ace monster. He begins this comeback with an ability that taps into his Crest Pool for a permanent power boost to “Orgoth’s” ATK. “Orgoth” marches to his victim, and Yami knows that defending won’t help against this attack. The giant sword swings down, crashing through with a great explosion. But when the smoke clears, “Strike Ninja” is still standing. Duke is thunderstruck, and Yami explains the latest effect he learned: “Strike Ninja” can draw on Trap Crests to gain the ability to dodge attacks, taking no damage. Duke is now angrier than ever, but he can do nothing as Yami takes his next turn and launches another attack with “Strike Ninja”. It hits, putting Duke down to only one Heart Point left.

Duke takes his turn, and “Orgoth” goes in for another attack. Yami realizes he has no Trap Crests left, and this time, the slash hits home, wiping out “Strike Ninja”. Duke turns to his nemesis, muttering that it was close, and Duke may be one Heart Point behind, but now he has “Orgoth” ready to finish the job. Furthermore, Yami’s recent plays have all but covered his territory — there aren’t as many as three open squares in a row anywhere on his side. Because of this, Duke knows that all he has to do is plow through the three minute monsters Yami has left, and there’ll be nothing to stop him from winning. And with so much on the line, Yami can’t even think about what will happen if he loses.
This article uses material from the Episode 048 article on the YuGiOh! wiki at Wikia and is licensed under the Creative Commons Attribution-Share Alike License.