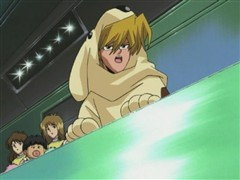 Orgoth destroys three of Yugi’s monsters and begins to close in on Yugi’s hearts. After taking one away, Yugi tries to find some way to defeat Orgoth and he summons the Dark Magician onto the field which demolishes him. Then, after using the mystic box, one of the Dark Magician’s magical effects, to switch places with Deranzo, he wipes out Duke’s final point, winning the match and Joey’s freedom. 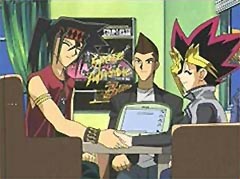 Duke apologizes to Yugi, realizing what a jerk he’s been, and now that he broadcasted it to the world, he thinks his game shop is doomed. But Yugi tells him once dungeon dice monsters is advertised a little, it’ll be a great hit. Just as Yugi and Duke agree to become friends, Duke gets an e-mail from Industrial Illusions, who agree to market the game globally. Duke then thanks Yugi for showing him what real duels are about, getting to know your opponent and making new friends.