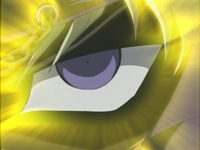 The duel between Yugi and Bandit Keith continues. With 1500 life points left, Yugi tells himself that he needs to figure out a way to win the duel and seize control of his Millennium Puzzle. He wishes his friends were with him. Bandit Keith, who has 500 life points, has the upper hand thanks to his Zera the Mant monster. Yugi draws a card, which happens to be Koumori Dragon. The monster is too weak, so Yugi places it in defense mode. The outsider who is controlling Bandit Keith’s mind knows that Yugi’s deck is utterly weak and that it cannot defeat his supreme deck.

Bandit Keith draws and plays Seiyaryu in attack mode. With 2500 attack points, it is another target for Yugi’s life points. Then after pulling another card from his sleeve, he places the card face down (which is Magic Jammer). Bandit Keith then plays Stop Defense, forcing Koumori Dragon to switch to attack mode. Zera the Mant attacks the monster, lowering Yugi’s life points down to 400. Yugi looks down at his puzzle and realizes that he can’t give up. So he plays another monster in defense. Bandit Keith is getting bored of Yugi’s defenses. He has Seiyaryu attack Yugi’s monster, which happens to be Mystical Elf. Then Bandit Keith places two cards face down and switches Zera to defense mode.

Yugi draws and finally gets something good in his hand. He places a card face down onto the field and then summons Dark Magician in defense mode. Then Yugi plays Magical Hats. However, Bandit Keith activates his Magic Jammer and destroys Yugi’s magic card. It’s Bandit Keith’s turn again and he plays a magic card known as Curse of Fiend. This card forces all monsters to switch to their opposite mode. (Attack position monsters go into defense and vice versa.) Because Zera was in defense mode, it is now in attack mode, and so is Dark Magician. Zera attacks Dark Magician. Yugi counters with Mirror Force; however, Bandit Keith uses Solemn Judgment to destroy Mirror Force. Dark Magician is destroyed, leaving Yugi down to his last 100 life points.

Meanwhile, Bakura stands outside of the warehouse. He senses a darker evil coming from inside and finally enters. He finds Yugi and Bandit Keith dueling for the Millennium Puzzle. Back at the duel, Yugi puts his trust into his deck in hopes for something good. He draws and places a card face down. Then he summons a monster in defense and ends his turn. The outsider that is controlling Bandit Keith is impressed that Yugi got so far in the duel, but he swears to take Yugi down. He draws a card from his sleeve again, revealing it to be Tribute to the Doomed, a powerful magic card. Bandit Keith uses its effect on Yugi’s monster, but Yugi activates his personal favorite card, Living Arrow. This card redirects Tribute to the Doomed’s effect back at Bandit Keith’s monster, Zera.

Meanwhile, Bakura is investigating the duel and discovers that Bandit Keith is being controlled by someone else. He uses the power of his Millenium Ring to break that spell. Bandit Keith gains his old self again, but only for a little while. He screams in horror, wanting the outsider to get out of his mind. This mystery outsider is angry that someone else is weakening his spell, but he doesn’t give up. Bandit Keith eventually falls under the outsider’s control again. However, insTéad of continuing the duel, Bandit Keith runs out into the arena, takes the Millennium Puzzle in his hand, and smashes it into pieces. Yugi screams as his puzzle is smashed. Suddenly, Bakura comes swinging in and knocks Bandit Keith to the ground. Bakura gathers up the pieces and hands them over to Yugi. Yugi thanks Bakura and decides to rebuild the puzzle again. This time he may have a better chance since he built it before. While Yugi is putting his puzzle together, Bakura talks to himself about how powerful the Millennium items are and that the power of his Millennium Ring will help him track them down. Bakura has secretly kept a piece of the puzzle to himself, and he has a portion of his spirit transferred into the puzzle so that he can always be near its power. He then hands the last piece to Yugi and walks away. 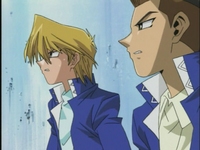 The outsider tries to take control of Bandit Keith again, but this time he has a harder time doing so. Bandit Keith tries to get this outsider out of his head. He picks up a pole and swings it around, hitting everything in site. A fire starts to burn. While searching for Yugi, Joey, Tristan and Téa sees the smoke coming out of the warehouse, and so they investigate. Yugi is trying to get his puzzle down. Unfortunately for him, the puzzle’s chain is tightly bolted to the wall, and he can’t rescue it with his strength.

Joey, Tristan and Téa run up to the burning warehouse. They hear a scream of “Help!” coming from the inside. Joey and Tristan decide to find out who’s in trouble, and Téa runs off to call 9-1-1. Tristan grasps on the warehouse door’s handle, but it’s burning hot. So their only choice is to break down the door. Meanwhile, Yugi is busy putting together the puzzle again. His hope is to save the spirit of the puzzle, even if he doesn’t make it out alive. Joey and Tristan eventually break down the door, and Bandit Keith immediately comes running out. Joey and Tristan are both surprised that they just rescued Bandit Keith. Nevertheless, they decide to search the warehouse to make sure no one else is in trouble. They find Yugi putting together his puzzle. Yugi refuses to leave without his completed puzzle, so Joey and Tristan go after him. Finally, Yugi is able to solve his puzzle, but the intense heat from the fire has made him dizzy. Since Yugi won’t leave without his puzzle, Joey and Tristan have no choice but to try and release the puzzle from the wall. While Joey is occupied with that task, Tristan gets Yugi’s deck from the arena.

Joey still cannot loosen up the bolt from the wall. The fire is spreading quickly, and they do not have much time. Joey finds two poles, so he and Tristan use them to try and knock the bolt out of the wall. Unfortunately, the bolt does not budge. Suddenly, Joey gets another idea. He places the pole into the hole of the bolt, and he and Tristan pull as hard as they can on the pole. The bolt slips out of the wall, and the Millennium Puzzle is safe. They carry Yugi out of the warehouse and to safety. Téa is so glad to see that they are all safe.

Yugi is recovering in a hospital. He thanks Joey and Tristan for saving his life. Joey feels like a hero since it was his idea that saved them. Tristan makes fun of Joey’s idea, and the two boys begin to fight. Yugi stops them by saying he won’t share his hospital food if they keep fighting. They are all just glad that they are safe together. However, Téa has a lot more on her mind. She fears that someone is after Yugi’s Millennium Puzzle and that they are all in danger. 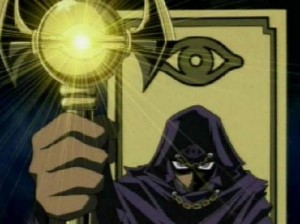